How to Assess Immunotherapy Toxicity with NHP Models 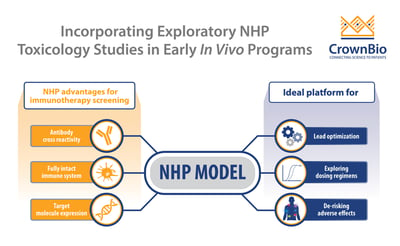 How to Assess Immunotherapy Toxicity with NHP Models

Clinical immunotherapy toxicity can be unpredictable, with adverse events seen which aren’t observed in preclinical testing. The most serious (and potentially life threatening) clinical side effect is cytokine release syndrome, an immune-related adverse event associated with T cell engagement, proliferation, and a “cytokine storm”.

It’s therefore vitally important that CRS and other potential immunotherapy toxicities are appropriately assessed in the preclinical space before clinical trials.

There are major challenges, however, when it comes to assessing immunotherapy toxicity - not least that an optimal preclinical model does not exist. While murine models are often used for testing I/O agent PD and efficacy, they’re less useful for safety testing and predicting human toxicity such as cytokine storms.

One way to move past this is to select a preclinical species with closer immunological homology to humans. NHP homology combined with an intact immune system allows you to test for I/O agent and antibody cross-reactivity and to screen for toxicity in NHP non-GLP exploratory toxicology studies.

This type of study is usually performed early during an agent’s in vivo development program, and is used as a:

Study design should be carefully considered. There’s a long list of factors to think about including model background and status, weight (which is how cohorts are selected), as well as study history. Sampling frequency should consider ethical limits, and study endpoints to select include classical toxicology endpoints as well as immunological markers and PK.

Non-GLP exploratory toxicology NHP studies allow for flexible and customized study designs. This includes long-term testing (e.g. 6 week studies) that goes beyond the standard 28-day toxicology studies required before Phase I studies. Longer studies like this allow flexibility to alter dosing, and to truly understand the impact of compound dose on toxicity.

Shorter studies can also be designed, but using a larger number of animals per group if you have a large pipeline to assess.

This can be addressed in non-GLP exploratory NHP studies which allow for variations in duration and dosing regimens. Multiple dosing paradigms can be assessed, along with a range of study types e.g. escalating/de-escalating, repeated dose, MTD.

There are multiple ways to screen for potential immune-related toxicities in these studies:

In vivo cytokine and chemokine profiling is supported by in vitro immune marker expression profiling in blood samples from humans and NHPs. This explores differences in immune cell marker expression (including cytokines, cluster of differentiation markers, and immune checkpoint targets) between the two species. This data is useful to prevent underprediction of preclinical toxicity due to changes or differences in expression of immune cell markers between humans and NHPs.

Non-GLP exploratory toxicology NHP studies are also useful to de-risk adverse events seen in clinical trials of similar agents. For example, if bleeding events have been seen clinically then bioassays can be developed to assess this preclinically through a variety of bleeding and clotting biomarkers. Extensive FACS and multiplex analyses can help to de-risk previously seen clinical cytokine events.

Top 3 Ways to Use Tumor Organoids for Drug Screening

Explore the main applications for tumor organoids in preclinical cancer drug development, driven by the unique features of these models.

Explore the phenotypic and genetic concordance between HUB patient-derived tumor organoids and the primary human cancers they were derived from,...