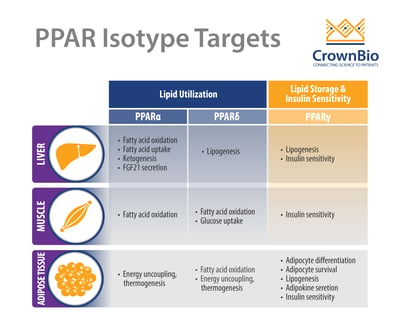 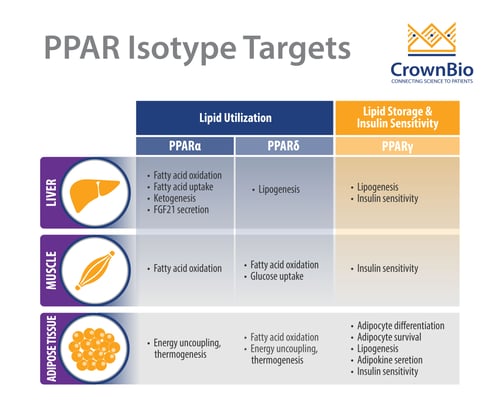 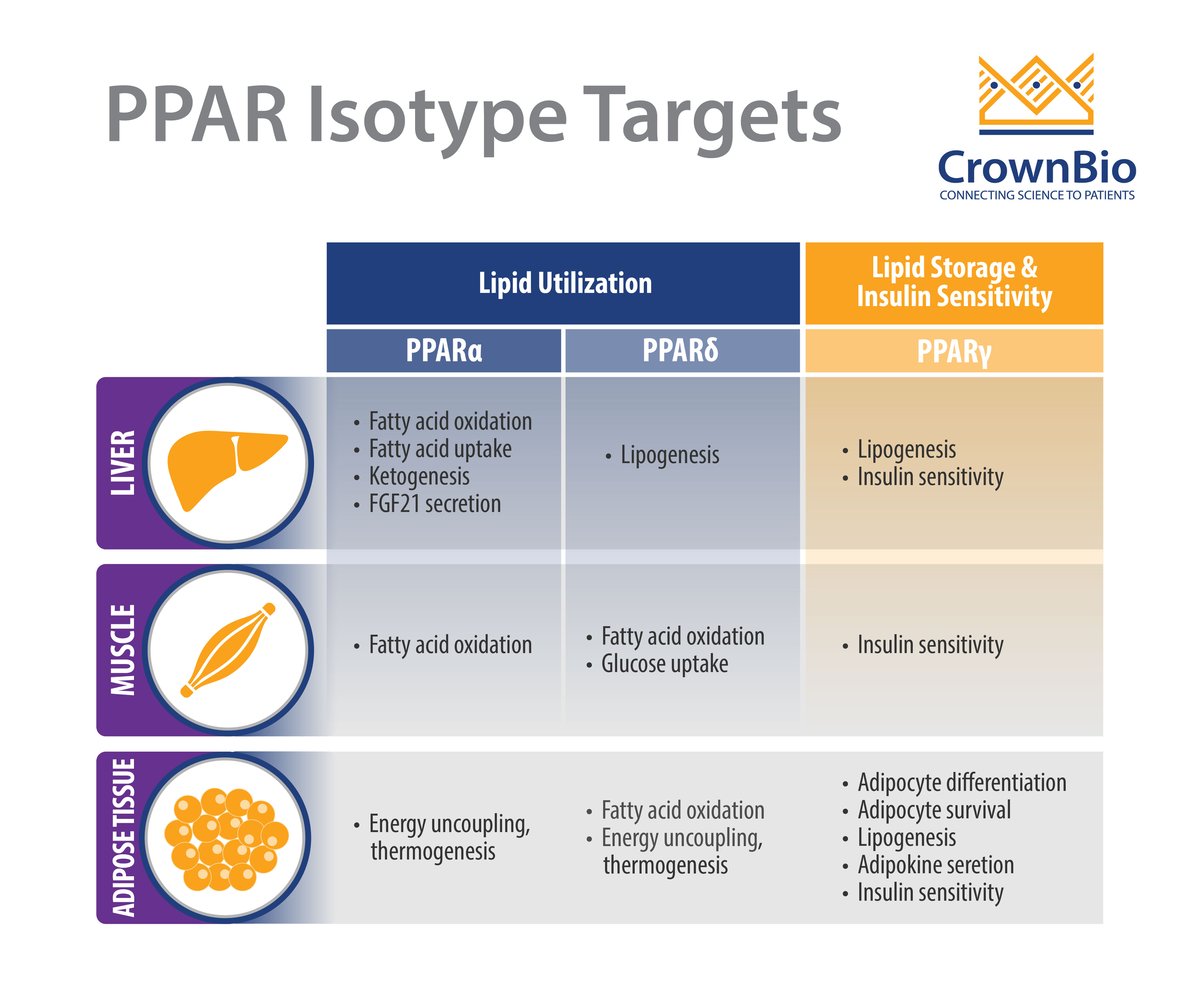 There are many different groups of agents being trialed to treat nonalcoholic fatty liver disease (NAFLD)/nonalcoholic steatohepatitis (NASH). Phase 2 and 3 clinical testing, however, is notoriously arduous, and the FDA has yet to approve any drug for these indications.

One main contender, Genfit’s elafibranor, was scrapped in July after failing to meet Phase 3 trial primary endpoints. Elafibranor is an agonist of two of three PPARs.

Despite this high profile case of attrition, PPAR agonism is still being groomed by numerous pharma companies as a strategy for NASH therapy. In this post, I’ll take a look at the perceived therapeutic benefits for stimulating PPARs, and the current state of the clinical landscape.

The PPARs comprise three isotypes in a family of class II nuclear receptor proteins. These are nuclear-shuttling factors that heterodimerize with the retinoid X receptor upon binding to activating ligands that have permeated through the cell. They directly mediate transcription from target genes with PPAR responsive elements.

The α isotype was the first discovered, and was named for its role in the transcriptional response to the peroxisome proliferator group of drugs and toxins. Peroxisomes are organelles with a variety of metabolic functions, a chief one being conversion of long chain fatty acids through beta oxidation. The resultant medium chain fatty acids feed the mitochondrial citric acid cycle.

PPARα is joined by isotypes γ and δ (also annoted as β or δ/β). They possess similar structural features and both overlapping and divergent functional roles, with special contributions toward control of lipid metabolism. Their expression is most abundant in tissues with high metabolic activity. The endogenous ligands of PPAR are fatty acid derivatives generated during lipolysis, lipogenesis, or catabolism, but many synthetic drug agonists have also been developed.

PPARα is expressed broadly in the body, and with abundance in tissues with elevated rates of fatty acid oxidation, including liver, heart, skeletal muscle, and brown fat. PPARα is a crucial sensor of fatty acids in the liver, activating genes for peroxisomal, mitochondrial, and microsomal oxidation pathways, as well as for fatty acid uptake. It is a key activator of ketogenesis and energy generation in a nutrient deprived state. PPARα also upregulates hepatic production of the insulin-sensitizing hormone FGF21, which may provide additional benefits for glucose homeostasis during obesity.

PPARα expression levels are inversely correlated with histological severity of NASH and insulin resistance, and positively associated with NAFLD resolution in rodents and in humans.

PPARδ is ubiquitously expressed, and like PPARα is strongly associated with demand for fatty acid oxidation in peripheral tissues. It promotes increased fat-burning oxidation in muscles during exercise and in metabolically active adipose tissue. Somewhat paradoxically, PPARδ enhances glucose use by the liver, and promotes hepatic lipogenesis. In the aggregate, however, peripheral fat oxidation may outweigh hepatic fat accumulation, and the resulting improvement in systemic lipid homeostasis has a net benefit on improving hepatic steatosis.

PPARγ agonism leads to increased adipocyte secretion of the hormone adiponectin, which promotes insulin sensitization and glucose uptake in tissues like skeletal muscle. This may significantly outweigh the potential pitfall of augmenting hepatic lipogenesis: PPARγ is expressed at low levels in the liver, but may be abnormally abundant in patients with NAFLD. An added benefit of PPARγ agonism in the liver is to promote senescence of activated hepatic stellate cells, these being the chief drivers of fibrosis in NASH.

The syndrome of NASH is, fundamentally, a consequence of chronic inflammation arising from chronic lipotoxicity. In addition to averting toxic hepatic lipid buildup, PPARs further protect against inflammatory disorders of obesity through routes independent of fat metabolism and storage. PPARα induces expression of nuclear factor IκBα. This is a repressor of NFκΒ, a crucial activator of proinflammatory response; IκBα suppresses production of cytokines that cause systemic inflammation. PPARs also interfere with inflammatory signal responses via direct protein-protein interactions against components of different signaling pathways.

Translating the Effects of PPAR Agonism

The fibrates were the first PPAR agonists introduced into clinical practice in the 1970s. These activate PPARα; agents including fenofibrate and clofibrate were approved for dyslipidemia and hypercholesterolemia. They have been evaluated for NAFLD/NASH, and may improve some noninvasive markers of disease, but show minimal benefits on liver histology.

The thiazolidinedione class (TZDs) of PPARγ agonists of were developed in the 1990s as insulin sensitizers to treat T2D. The main approved TZDs for treatment of T2D include rosiglitazone; and pioglitazone, which also activates PPARα with less selectivity.

Rosiglitazone and pioglitazone have been evaluated for NAFLD/NASH, but face a high burden to demonstrate efficacy in this indication will outweigh adverse effects. Meta-analysis has shown that rosiglitazone is associated with increased risk of heart attack, and it has been withdrawn from numerous markets outside of the USA. Long-term use of pioglitazone may also be associated with increased rates of bladder cancer, although this is debated. Other common side effects of TZDs include weight gain, fluid retention, and bone fractures.

The glitazars were the next class of PPAR agonists, exerting dual action on PPARs δ and γ, and several have been evaluated in clinical trials for T2D indications. These include aleglitazar, tesaglitazar, and muraglitazar. They have generated significant safety concerns, including major cardiovascular events and kidney impairment. Muraglitazar (Pargluva) had even been recommended for approval by the FDA, before a separate review highlighted severe adverse reactions. Most Western pharmaceutical companies have abandoned glitazars for clinical trialing.

Saroglitazar is approved to treat diabetic dyslipidemia in India, and represents the sole glitazar in clinical testing for NASH. In Phase 2, it decreased liver fat and serum markers of liver injury in diabetic subjects with NAFLD/NASH. Chiglitazar is a panPPAR agonist with balanced activity toward the three isotypes; it has demonstrated good safety and is currently in Phase 3 trials for T2D in China, but has not yet been evaluated for NAFLD.

Two PPARδ exclusive agonists have intriguing development histories. GW501516 (Cardarine) was abandoned by GlaxoSmithKline due to preclinical data suggesting it causes multiorgan carcinogenity, after multiple clinical trials were already underway. Based on its ability to enhance exercise and physical performance, it has become a popular athletic doping agent on the black market.

CymaBay Therapeutics was forced to suspend all their clinical programs for seladelpar in 2019 after atypical histological findings were observed at the end of a 52 week Phase 2b NASH study. Strangely, none of the histology was corroborated by subsequent clinical or biochemical analyses, and an independent pathology review was commissioned to reexamine the biopsies. The committee could not corroborate the adverse results, and topline data had further shown treatment significantly reduced surrogate markers of liver disease. The hold has been lifted and CymaBay is deliberating advancing to Phase 3.

Genfit’s elafibranor was, until May 2020, a hotly touted Phase 3 PPARα/δ dual agonist expected to deliver tremendous returns on investment. Surprisingly, in June Genfit announced it would discontinue characterization of this candidate for NAFLD/NASH after interim endpoints were not achieved. These included primary endpoints of NASH and/or fibrosis resolution, and secondary metabolic endpoints. The drug will, however, proceed as planned in trials for primary biliary cholangitis.

Inventiva’s lanafibranor may be the most promising NASH candidate to survive 2020 without collateral damage. This is the only panPPAR agonist currently in clinical development for NAFLD/NASH. Inventiva very recently announced that the drug achieved primary and secondary endpoints in a 24 week Phase 2b clinical trial, including resolution of NASH as measured by two scoring systems; improvement of fibrosis; decrease of surrogate markers of liver disease; and decreased triglycerides and glucose in enrollees with diabetes.

The FDA is pushing for an increasingly rigorous burden of efficacy required to approve a NAFLD/NASH drug. It is becoming clear that resolution of hepatic lipotoxicity should improve both steatosis and fibrosis, and be accompanied by numerous secondary benefits for systemic glucose, cholesterol, and triglycerides at a systemic level. Targeting of PPARs, especially for agents that are dual or pan-agonists, seems like a strategically viable way to meet this demand. 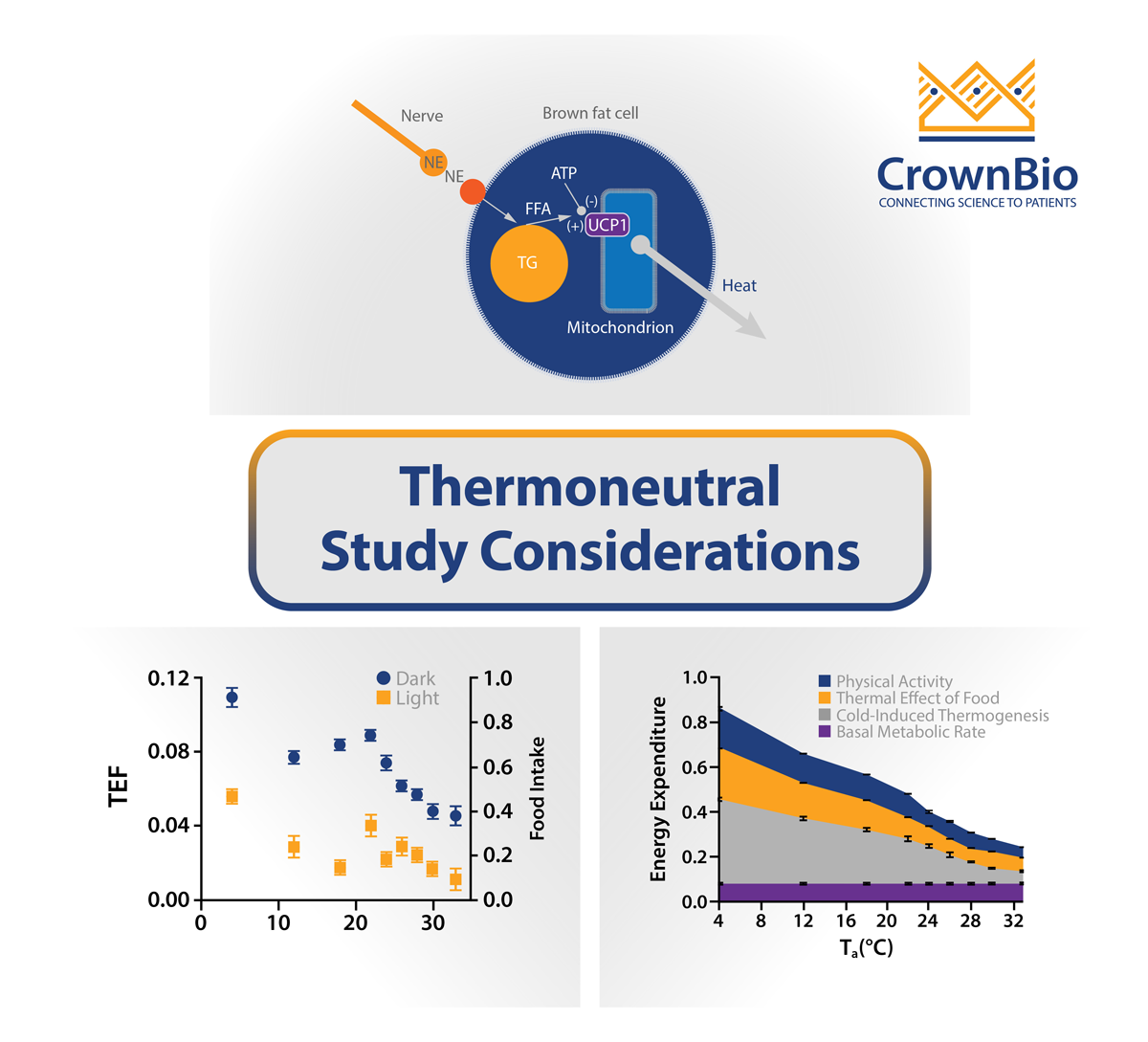