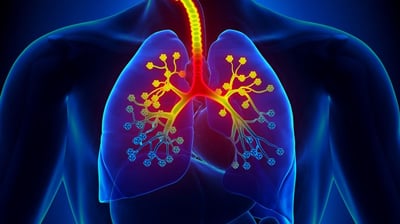 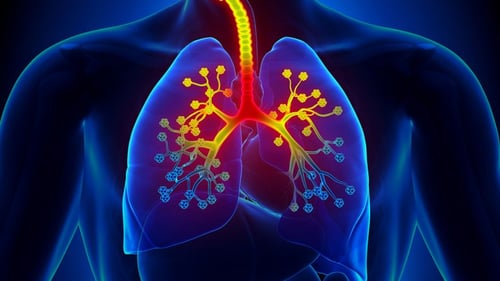 Each year, around 140,000 people worldwide (15,000 in the United States alone) are diagnosed with epidermal growth factor receptor (EGFR)-positive non-small cell lung cancer (NSCLC). EGFR-positive cancers have genetic changes that lead to an overactive EGFR protein, which fuels the growth of cancer cells.

Different mutations result in different treatment paths, and this post looks at the therapeutics available for classical, acquired resistance, and non-canonical mutations.

Activating EGFR mutations are found as oncogenic drivers in a significant proportion of NSCLC cases (∼15% of all NSCLC). The range of EGFR genetic alterations include:

All of these EGFR genetic alterations are regarded as important drug targets for NSCLC.

Despite this, first generation TKIs have a higher binding affinity to mutated EGFR, ensuring a potent response. 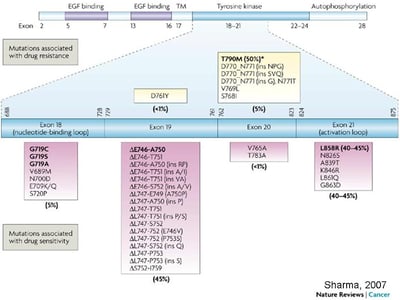 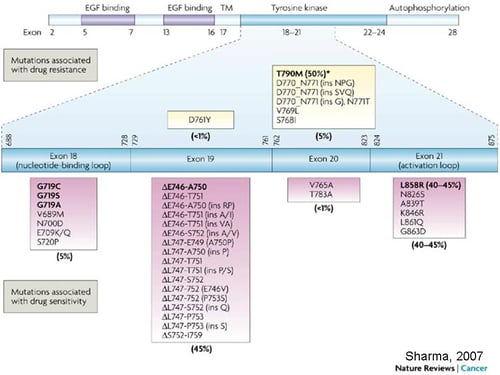 However, overall survival (OS) was not improved as the EGFR T790M resistance mutation ultimately emerged in most of these patients.

In contrast, the second generation (afatinib or dacomitinib) or third generation EGFR TKIs (osimertinib, rociletinib, and HM61713) were designed to have more potent inhibition of EGFR, as well as to overcome EGFR T790M.

The second-generation EGFR-TKIs are irreversible inhibitors with greater affinity for the EGFR kinase domain, also inhibiting other members of the EGFR family (ErbB2, ErbB3, and ErbB4).

Third generation TKIs are active against EGFR-activating mutations and the T790M resistance mutation, and have only limited efficacy against wild-type EGFR.

However, despite the promise of this last generation of TKIs, resistance has been described with C797X mutation identified as one primary mechanism.

Cetuximab (Erbitux®), a monoclonal antibody that interacts with the extracellular domain of EGFR, also demonstrated impressive activity against NSCLC with classic EGFR mutations2, with an assumed mechanism of blocking dimerization and/or ligand binding3.

What about Treating Patients with Non-Canonical EGFR Mutations?

The efficacy of the drugs discussed so far on NSCLC harboring non-canonical EGFR mutations is a lot less clear1. Exon 20 insertions are the most prevalent of the non-canonical EGFR mutations, located close to the end of the regulatory C-helix domain within the N-lobe of the kinase (after M766). These types of mutation are generally associated with resistance to existing TKIs (gefitinib, erlotinib, and afatinib)1,4,5, and the basis of this de novo resistance is poorly understood.

As more mechanisms of de novo and acquired resistance across all of NSCLC are unraveled, clinically relevant and predictive preclinical models are required to fully understand them, and to evaluate new agents and combination therapies to overcome this resistance, as well identifying which patients will benefit from any given treatment regimen.

References and Further Reading on the topic can be found here: