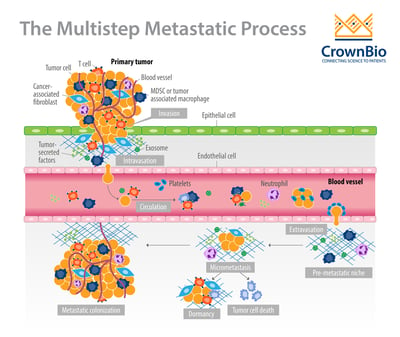 Explore the preclinical mouse models that best recapitulate the progression of the clinical metastatic process. 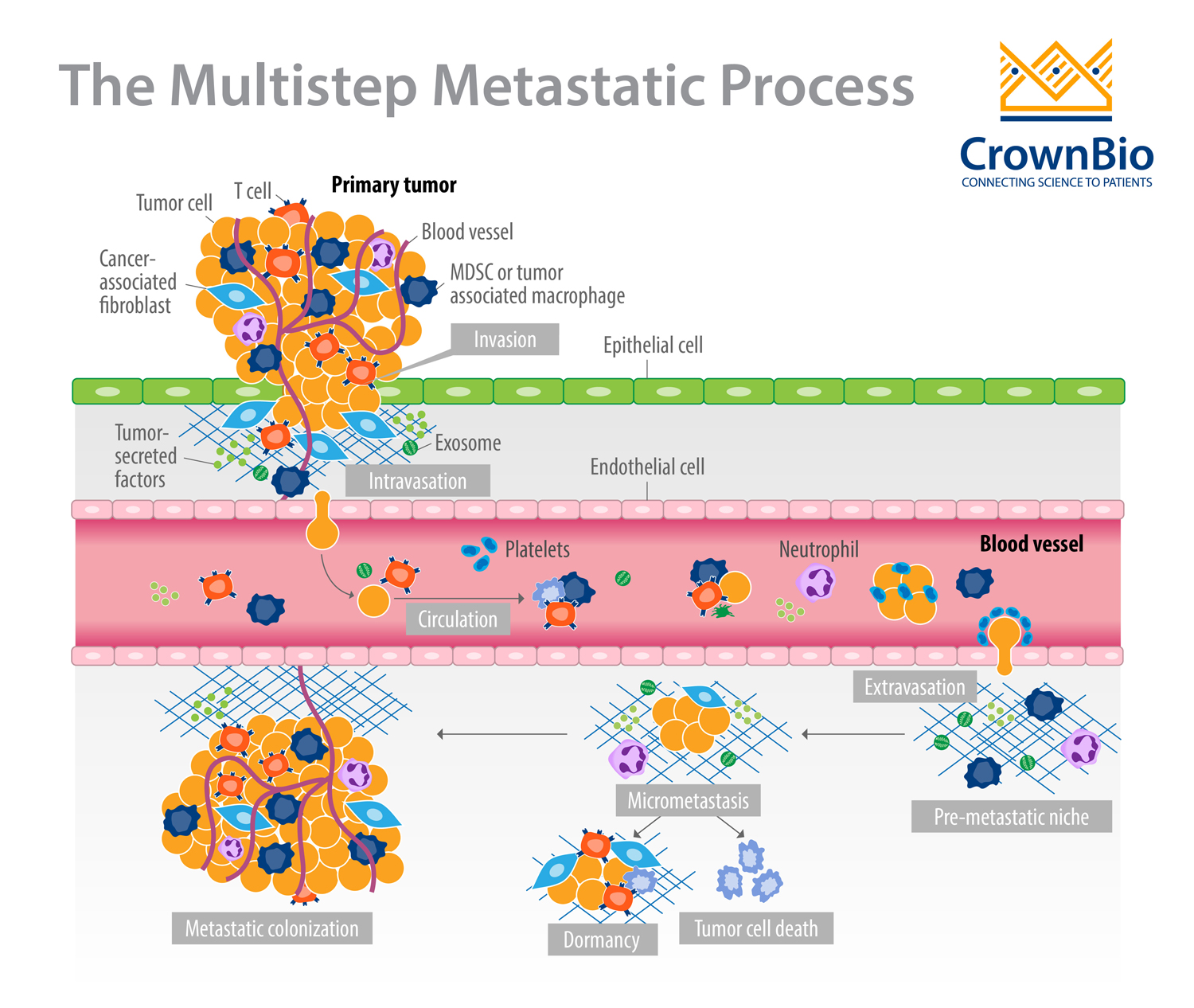 Metastatic cancer has devastating consequences for patients and causes more than 90% of cancer-related deaths. The formation of a metastasis is a highly inefficient process that results from a series of events permitting cancer cells to:

The propensity of a primary tumor to become metastatic is highly complex, and the details are still being deciphered. However, it is thought to be highly influenced by genomic alterations (genetic and epigenetic) within cancer cells and contributions from the tumor microenvironment.

Preclinical oncology mouse models play an important role in advancing our knowledge of the complex interactions and stages of the metastatic process. Improved models are helping researchers gain a better understanding of the underlying biological processes, as well as develop novel therapeutics to block metastasis or more efficiently treat already established metastases.

There are several approaches used to generate metastases in preclinical mouse models, and various considerations must be taken into account when selecting a metastasis model. These include the mouse strain (including its immune status), transplantation location (e.g. subcutaneous/ectopic, orthotopic, i.v.), and origin and type of transplanted cells (e.g. primary or immortalized human/mouse cancer cell lines, resected patient tumors).

Cell line derived syngeneic and xenograft models are commonly and successfully used to model the metastatic processes associated with various types of cancer. Examples include:

The syngeneic models are in the context of a fully competent mouse immune system, whereas xenografts are in immunodeficient environment.

Several key characteristics of metastasis were discovered using GEMMs, including that metastasis can occur early during tumorigenesis. It had been previously thought that metastasis only occurred late in the process.

A variety of GEMMs of different indications are available for modeling the metastatic process. These models display de novo tumor progression and metastasis formation in an immune-competent tumor microenvironment. This makes GEMMs well-suited models for studying the functional roles of various components of cellular signaling pathways, the tumor microenvironment, and immune response.

Through the development of de novo tumors, GEMMs enable modeling of the tumor’s cell-autonomous and stromal influences on all stages of the metastatic cascade. For this reason, models that allow conditional activation of oncogenes and/or inactivation of tumor suppressor genes in somatic cells recapitulate many of the key characteristics of human disease.

Examples of these models are detailed below for different cancer indications.

MMTV-PyMT is the most commonly used mouse model for the study of mammary tumor progression and metastasis. MMTV-PyMT transgenic mice express the Polyoma Virus middle T antigen under the transcriptional control of the mouse mammary tumor virus promoter/enhancer. This model shares many aspects of breast cancer progression seen in humans, characterized by multistage progression from hyperplasia to late carcinoma followed by metastatic lesions in the lymph nodes and in the lungs.

Several strategies have been used to generate prostate cancer mouse models. One of the most popular models is the Transgenic Adenocarcinoma of the Mouse Prostate (TRAMP) model for prostatic adenocarcinomas. The TRAMP model is based on SV40 T antigen oncoprotein expression under probasin. Distant metastasis is observed in lymph nodes and lung and occasionally in bone, kidney, and adrenal glands.

The most frequently-used mouse model for inducible lung cancer development is the LSL-KRASG12D model. This model harbors an activated form of KRAS, regulated by a LoxP-Stop-LoxP (LSL) transcriptional cassette.

Despite the wide number of colon cancer GEMM developed, few show metastases with considerable efficiency. As an example LSL-KRASG12V; APC flox/flox mice, when administrated with Cre adenovirus in the colon, induces the loss of APC and activation of oncogenic KRASG12V leading to sporadic tumor development followed by liver metastasis.

Patient-derived xenografts (PDXs) can be transplanted into immunocompromised recipient mice either subcutaneously or orthotopically. They are most commonly established subcutaneously because transplantation is less technically demanding and allows for efficient monitoring of tumor growth.

However, a wealth of experience has demonstrated that the majority of subcutaneous PDX models do not metastasize. In contrast, patient-derived orthotopic xenograft (PDOX) models, which entail the orthotopic implantation of intact tumor tissue, can lead to metastasis. This more closely resembles the true propensity of human tumors to metastasize and might better recapitulate their underlying metastatic processes. PDOX models have been successfully established using various tumor types, including pancreatic, lung, mammary, and colon.

Orthotopically-implanted tumors have also been shown to be superior for mimicking drug response, tumor growth patterns, and metastatic features (also see here) of corresponding patient tumors, which is likely due to the important influences imparted by the local stroma.

Orthotopic transplantation, however, can be time consuming and more technically challenging. It also often requires imaging (e.g. ultrasound, CT scan) or exploratory laparotomies to confirm the presence of internal tumors. Sometimes, there is a long latency, so resection of the primary tumor might be required to allow metastases to develop.

Metastatic disease is a devastating consequence of cancer for many patients. Preclinical mouse models that better recapitulate the full spectrum of the metastatic process are more likely to produce translatable research that improves their clinical prognosis. 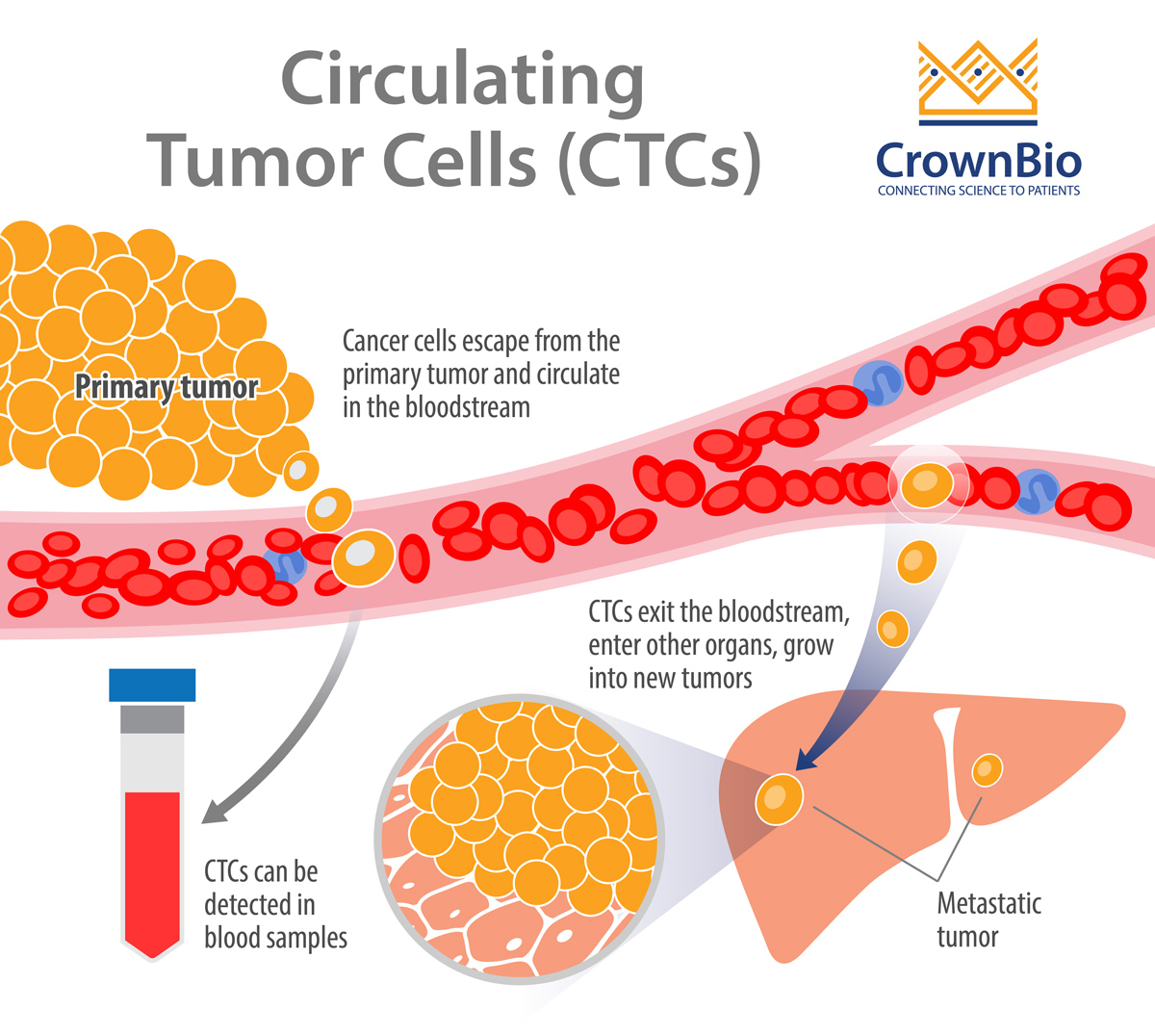