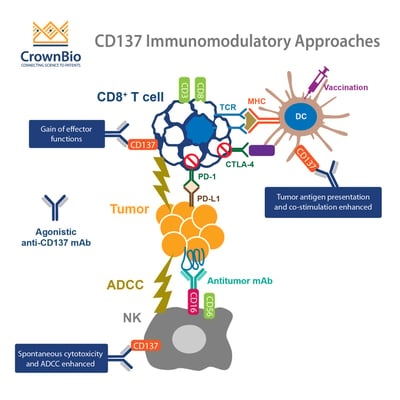 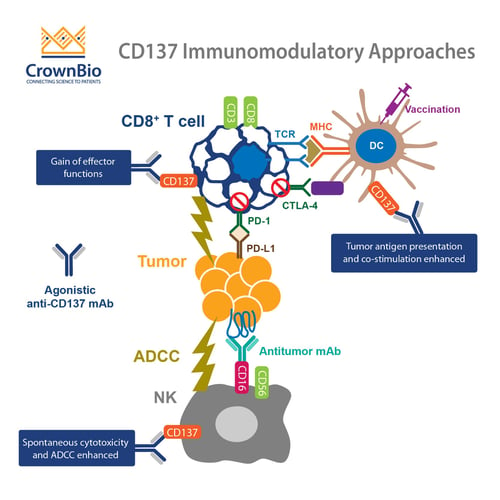 Following on from OX40, our TNF superfamily posts continue with CD137, another important target in T cell co-stimulation.

In contrast to the mode of action of checkpoint inhibitors (which is to block a ligand/receptor interaction) there is another class of immunomodulatory targets in the immuno-oncology world – the co-stimulatory targets.

For productive activation of a T cell, the cell must recognize its target through engagement of antigen and the cognate T cell receptor. The T cell must also receive co-stimulatory signal(s) in parallel. These signals are generated through the interactions of co-stimulatory ligands and receptors, such as CD137 and its ligand, CD137L.

CD137 Can Act as a Surrogate Marker for T Cell Activation

CD137 (TNFSFR9) was originally identified as a molecule induced on the surface of activated mouse and human CD4+ and CD8+ T cells, with its expression undetectable on non-activated T cells. It is also found on both NK and dendritic cells. Ligation of the receptor induces T cell proliferation and IL-2 production as well as inhibiting apoptosis.

Strong support for the role of CD137 in antigen specific and reactive effector T cells was the report that T cells could be enriched from blood-based on their CD137 expression, and could subsequently be demonstrated to show antigen specificity, including tumor antigens (1,2). Therefore, CD137 can act as a surrogate marker for T cell activation.

Further support for the importance of CD137 in antigen reactive effector T cells is reinforced by data suggesting that using CD137 to selectively deplete T cell populations can effectively control alloreactive T cells in the context of GVHD (3).

These observations, taken together, support that cells expressing CD137 are potent effector cells; those desired for immune control of cancer or those unwanted in autoimmune disease. In the case of the former, CD137 is a logical target for I/O applications.

The discussion above supports the use of agonistic antibodies targeting CD137 and is reviewed in more detail elsewhere (4-6). There are two antibodies currently in clinical trials:

Of interest is that in a significant number of cases, urelumab was responsible for adverse events, including liver toxicity and fatigue, while utomilumab had no evidence of dose limiting toxicities (5,7). Consistent for urelumab, liver toxicity has been observed in a murine model using anti-CD137 antibodies (8).

It remains poorly understood why there is this difference between urelumab and utomilumab, but as is often observed, clinical activity tends to go hand-in-hand with adverse event observations. Whether it is the case that urelumab’s performance on the efficacy side will be superior to that for utomilumab, reflected in the difference in adverse event profile remains to be revealed.

Needless to say, the results from the many clinical studies of the combination of CD137 agonists and checkpoint inhibitors is eagerly anticipated. Stay tuned to the ClinicalTrials.gov links noted above...and refresh your browser often.

Other uses for CD137 as a target have been employed. Interestingly, anti-CD137 is being tested clinically as an ex vivo stimulus for the expansion of TIL destined for re-infusion, and as a strategy to manage so-called T cell exhaustion (9). CAR-T therapy is also exploring the incorporation of CD137 in the second and third generation design of these agents (10).

While we eagerly watch the progress of the clinical trials involving urelumab and utomilumab, both as single agents and in the multitude of combination trials, it will be even more interesting watching where CD137 will be leveraged next.