Do you ever wonder how tumor organoids and ex vivo microtumors (i.e., patient tumor material) are being used in immuno-oncology (I/O)?

Are you interested in assessing your immunotherapy through tumor organoid co-cultures, with autologous and non-autologous immune cells?

Or maybe you want to explore how ex vivo microtumors can preserve tumor heterogeneity and resident immune cells, removing the need for co-culture systems?

Preclinical testing of cancer immunotherapies is challenging due to I/O agents needing complex and dynamic interactions between the tumor and immune system to be recapitulated in relevant models.

Current immuno-oncology models in vivo are broadly defined as either homograft systems, where the host immune system is intact, or humanized systems where the reconstitution of the human immune system is engrafted in an immunodeficient host. However, there are some limitations to these systems which may obscure efficacy and toxicity associated with an immunotherapeutic. For example:

The main challenges in modeling immunotherapy responses in vitro have been:

Tumor organoids are used in co-culture with either autologous or non-autologous immune cells, to provide a patient-relevant in vitro platform for immunotherapy development. Furthermore, as shown later, high content technologies are being used in high-throughput in vitro tumor organoid and immune cell co-culture studies to measure the effects of drugs and combination therapies on physiologically relevant morphological features, such as tumor cell killing, growth arrest, invasion and immune cell proliferation.

The Benefits of Tumor Organoid and Immune Cell Co-Culture

Two major benefits of using in vitro tumor organoids for I/O applications is the enhanced clinical relevance of tumor organoids compared to cancer cell lines and their simplicity in comparison to humanized in vivo systems.

The 3D architecture and spatial arrangement of multiple cell lineages results in the formation of mini-organs that recapitulate the genomic, morphological, and physiological features of the original tumor. The scalability and biobanking of organoids also readily enables the screening of multiple agents against human targets and combinations across different patients and cancer types to better reflect population diversity/heterogeneity and responder/non-responder profiling.

In comparison to in vivo platforms, the in vitro nature of organoid co-culture platforms also makes them highly scalable, which facilitates multiple agent screening and donor/model combinations can be tested at the same time prior to moving forward with more complex in vivo models. Another benefit is that healthy organoids are also available or can be developed simultaneously to evaluate any potential off-target effects on human tissues in parallel, which is not possible with in vivo models.

Autologous PBMC and tumor organoid co-cultures are actively in development, and there are some well-recognized challenges associated with this approach, including:

Immune cells were pre-labelled before adding them to the co-culture and HCI was performed to assess immune cell-mediated organoid killing over time, based on organoid tumor volume at different time points. Differential killing was observed depending on the activation status of immune cells and immunogenicity of each organoid model. 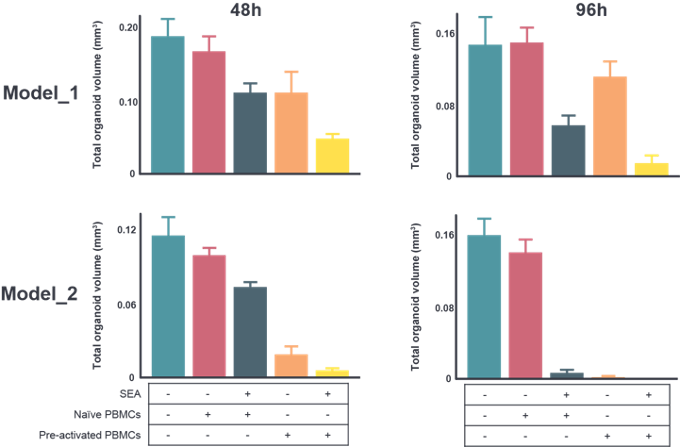 Immune cell migration can also be tracked by following stained immune cells that are added to the top of the hydrogel layer containing tumor organoids. Using HCI and image analysis, the number of immune cells is scored in different z-positions within the hydrogel and their distance towards the organoids can be analyzed. 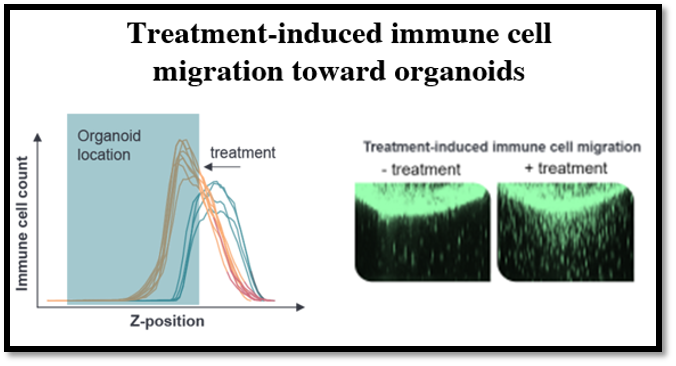 Tumor organoid killing by CAR-T cells has been investigated using several technologies, including ELISA, luminescence-based analysis of engineered organoids, morphology analysis, and FACS analysis. Three studies are summarized below to highlight how tumor organoid and CAR-T cell co-cultures can be used to investigate CAR-T cell efficacy.

The EpCAM CAR-T cells were cocultured with the two organoid types at different effector:target (E:T) ratios, and the co-culture supernatants were analyzed by ELISA for cytokine production after 24 or 48 hours. ELISA analysis demonstrated that EpCAM CAR-T cells caused a significant rise in the levels of IFN-γ and Granzyme B in the supernatant of EpCAM+ GA0091co-cultures, suggesting effective CAR-T cell reactivity against EpCAM+ GA0091 gastric tumor organoids (see graphs below). 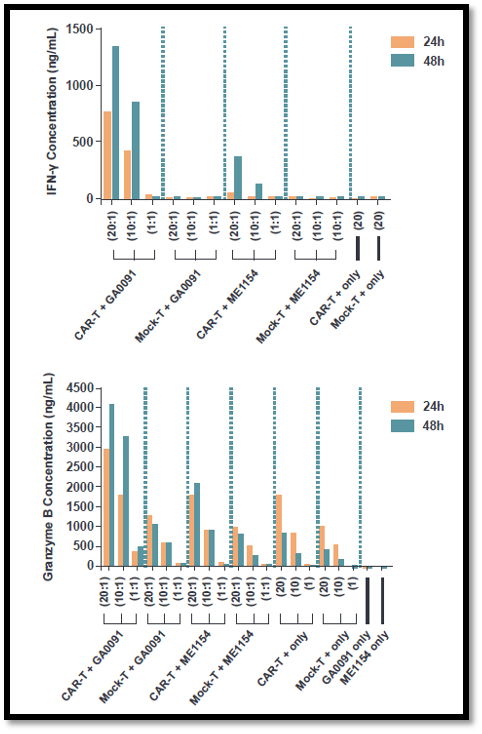 In a second study, liver tumor organoids (PDXO LI6677) were engineered to express luciferase and human CD19, and subsequently co-cultured with CD19 CAR-T cells for 2 days.

Luminescence-based analysis was then used to track organoid growth/death. The investigators reported that luciferase activity was successfully used to track killing of the tumor organoids (see graph below).

Overall, tumor organoid co-cultures are in vitro models that are more clinically relevant compared to cancer cell lines, and a higher scalability than in vivo models. Tumor organoid models that express specific tumor antigens can be selected using OrganoidBaseTM and as shown above, several different assays can be used to evaluate CAR-T cell reactivity to tumor organoids.

Another distinct advantage of tumor organoids for I/O applications, relative to in vivo models, is that they can be engineered to establish new immunotherapy models, such as by expressing specific CAR-T targets of choice. These models can also be modified to express luciferase or fluorescence reporters which allow the detection of tumor organoid killing via imaging.

3D Ex Vivo Microtumors: A Case Study to Highlight the Power of HCI in I/O

As described previously, the term “High Content” largely refers to the fact that many morphological parameters/features (which are measured using fluorescent dyes) of individual cells can be simultaneously evaluated in an automated fashion, such as cell cycle status, cellular and nuclear morphology, cell viability, receptor internalization, and protein aggregation.

This technology is now being applied to 3D ex vivo microtumors (i.e., patient tumor material) that preserve the native tumor architecture, and TME that contains components that express important drug targets,which play a critical role in both tumor progression and modulation of the response to drugs. This approach can therefore improve response predictability to I/O candidates.

Tumor organoids have certainly started to bridge the gap between tissue culture systems and patients in the clinic. Using tumor organoids for immuno-oncology applications offers researchers an attractive additional preclinical option for modeling the complexities of tumors in vitro for scalable I/O drug development including drug combinations on different cancer types.

While the use of tumor organoids allows the reconstitution of the TME by incorporating different cellular players in one co-culture, the 3D ex vivo tumor cultures contain an intact TME from the patient.

These patient-relevant models can significantly improve the preclinical evaluation of I/O drugs, and also to potentially improve the success rate of clinical trials.