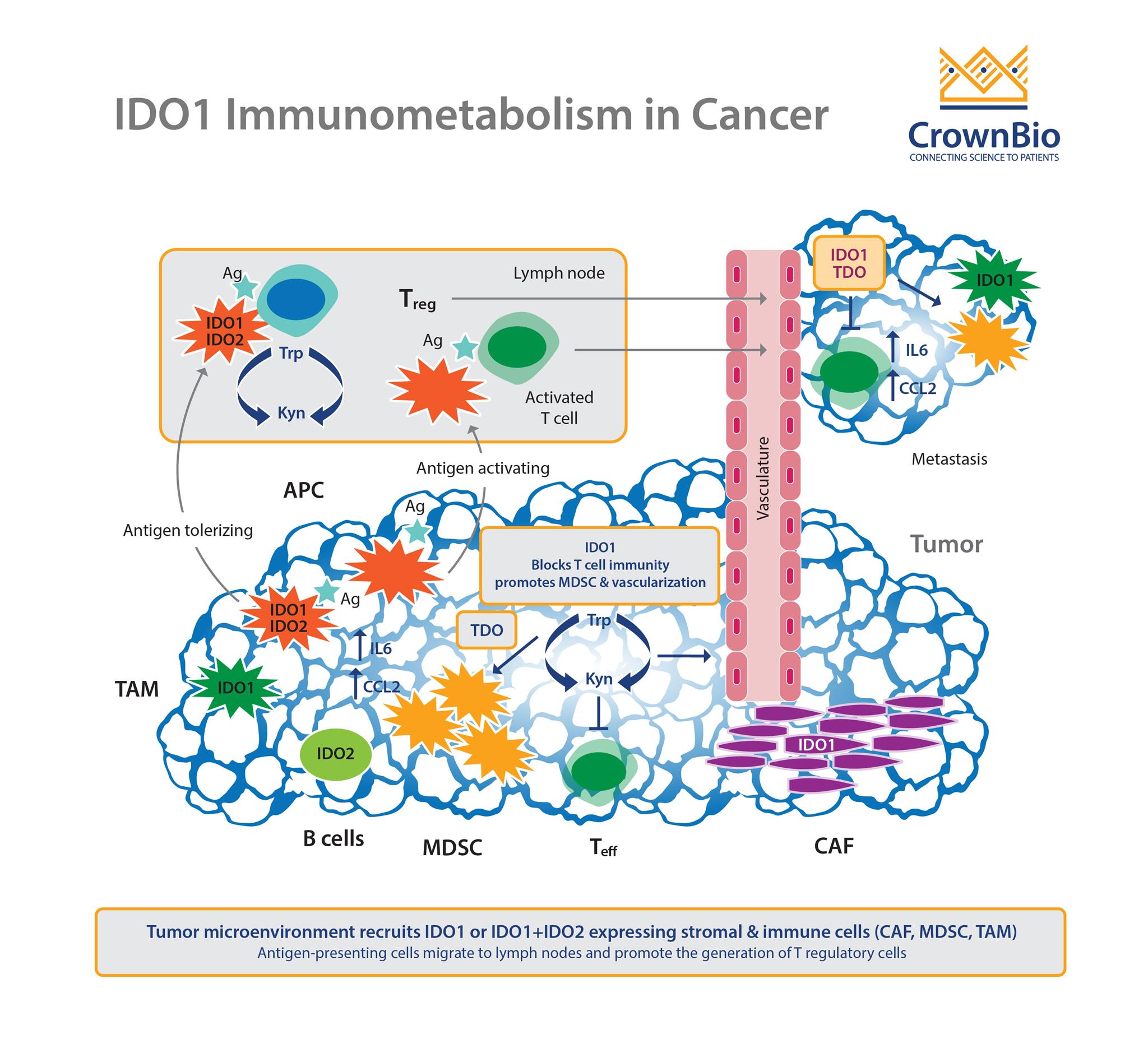 IDO1 functions in tryptophan catabolism, reducing the levels of extracellular tryptophan and increasing levels of the resultant product kynurenine. In the immune environment, tryptophan deprivation impairs antigen-dependent T cell activation, and requires both the restoration of tryptophan and an activation signal to restore T cell proliferation. Preclinically (and, researchers hoped, clinically), coadministration with checkpoint inhibitors could be one way to provide that activation signal.

IDO1 further modulates immune response through the increase in kynurenine. This acts as an immune suppressive agent by binding to the aryl hydrocarbon receptor (AhR), inducing dendritic cell and regulatory T-cells in turn.

It may also play a role in regulating the production and function of other suppressive cell types, such as myeloid derived suppressor cells (MDSCs).

Most human tumors constitutively express IDO1, and it may help induce immune tolerance of disease similar to its role in pregnancy. Overexpression of IDO1 by immunogenic mouse tumor cells prevents their rejection in preimmunized mice. In mice treated with an IDO1 inhibitor, T cell accumulation in tumor infiltrates is impaired, confirming the role of IDO1 in reducing tumor immune response.

Multiple companies rushed to invest in IDO inhibitors, either through internal programs (e.g. Incyte’s epacadostat) or via acquisitions and alliances, such as BMS’ $1.2 billion acquisition of Flexus, NewLink Genetics’ alliance with Genentech, and Pfizer’s partnership with iTeos.

However, as is common with early trials, the studies were either small, or lacked a control, comparator arm with patients treated with anti PD-1 only.

The first study was the KEYNOTE-252/ECHO-301 trial of Incyte’s IDO1 inhibitor epacadostat. No benefit in progression free survival (PFS) or overall survival (OS) was observed with combined epacadostat + anti-PD-1 antibody treatment compared to anti-PD-1 monotherapy. This disappointing result led Incyte to shut down the trial in early April.

Incyte also cut back their other epacadostat clinical studies, from nine to essentially just two remaining trials of epacadostat in combination with anti-PD-1 in non-small cell lung cancer (NSCLC).

Incyte is not alone in purging IDO1 inhibitor clinical studies. Other programs which have been halted include:

Were there hints that could have predicted the lack of clinical response? Perhaps. Preclinically, IDO1 inhibition has only limited antitumor efficacy on its own. It requires combination with anti-PD-1 agents to achieve regression in animal models. IDO1 knockout mice also show no sign of overt autoimmune disease, unlike the PD-1 or CTLA-4 knockout mouse phenotypes.

Another hint may lie in the pharmacodynamics data reported by Incyte. The inhibitor resulted in >90% inhibition of kynurenine levels based on ex vivo stimulation of patient blood. However, overall reduction of kynurenine plasma levels maxed out at closer to 50% of pre-dose levels. It’s possible that this is insufficient for immune modulation.

The problem may also lie in pathway redundancy. In a healthy person, tryptophan 2,3-dioxygenase (TDO) also plays a major role in tryptophan catabolism. TDO actually controls >95% of tryptophan degradation but its expression is normally restricted to the liver.

However, TDO is also overexpressed in many tumors, including melanoma, and could be the reason why selective IDO inhibition is less effective than hoped. An alternative approach may be to identify an IDO/TDO dual inhibitor to better limit tryptophan catabolism. There are also potential downstream points of intervention, such as the AhR which uses kynurenine as a ligand.

The Future of IDO1 Inhibitors

Future clinical strategies may also focus on identifying potential biomarkers of response. Stratifying patients based on high IDO1 expression, low TDO expression, and presence of infiltrating lymphocytes might help maximize the ability of an IDO1 inhibitor to modulate antitumor immune response. This approach may be a testable clinical hypothesis to help identify responders. A close look at the IDO1 pathway and components may reveal other approaches.

There may also be potential for success in indications other than melanoma. The indication with the best response for patients treated with combination checkpoint inhibitor therapy (ipilumumab + nivolumab) is melanoma, a stunning 58% 3 year overall survival rate. Clearly melanoma is a disease where checkpoint inhibitors are highly active. However, most of the IDO1 data released to date is from melanoma. It’s possible that the IDO1 inhibitor efficacy is obscured by the effects of anti-PD-1. Other indications may be able to help discriminate an IDO1 inhibitor effect in combination.

Intriguing preclinical evidence and early clinical data caused an unusual amount of hype and excitement for this class of drugs, which in turn led to a frenzy of deals, acquisitions, clinical trials, and combinations. Now, with disappointing late stage clinical trial data, it appears there’s a similar rush to pass judgement on IDO1 inhibitors as a validation failure.

However, there may still be opportunity in pharmacological inhibitors of tryptophan catabolism, whether it be with novel clinical approaches with the current crop of IDO1 inhibitors or with a next wave of new molecules. A focus on a better understanding of the biology combined with a rational strategy may rescue these programs yet.