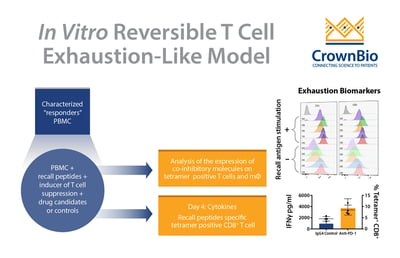 Review the latest advances in the recall antigen assay, to provide an optimized system for screening and characterizing immunomodulatory drug candidates, including recapitulating aspects of a suppressed tumor microenvironment (TME). 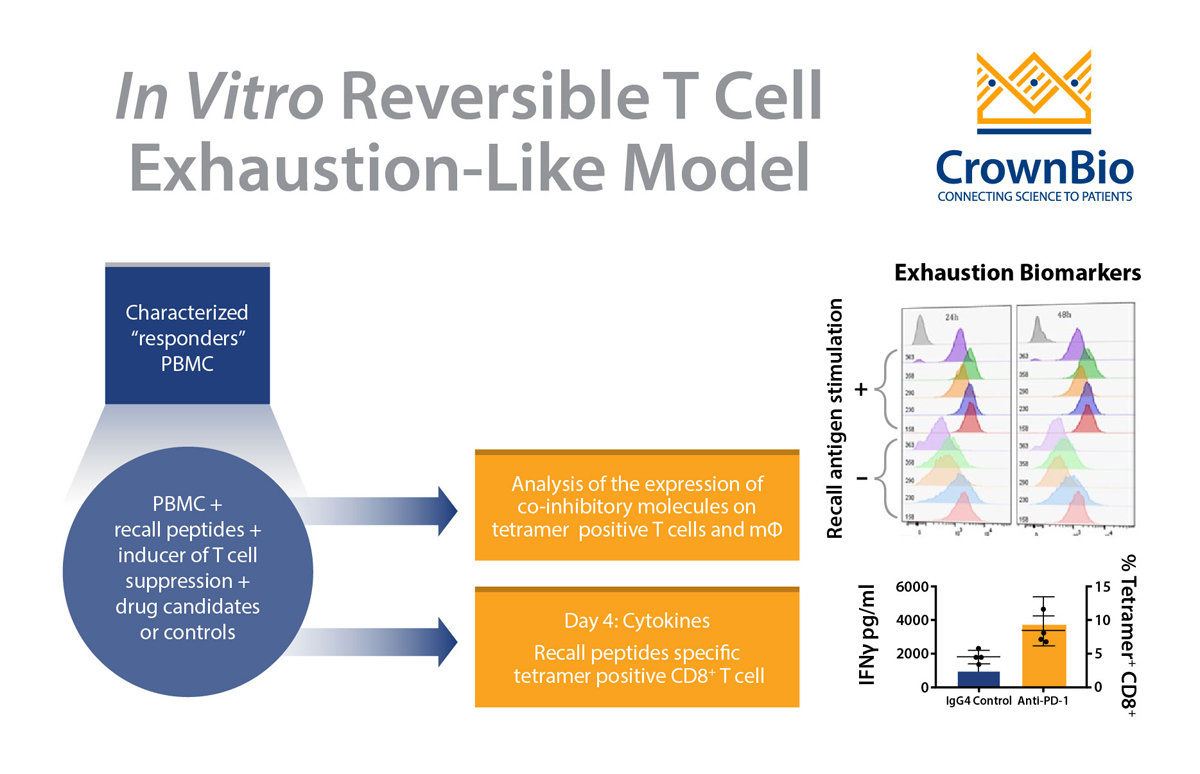 Why Functional-Based Characterization of Immunomodulatory Drug Candidates is Essential

Identifying a lead immunomodulatory drug candidate is a major responsibility for companies developing immunotherapeutics. Selecting models for target dependent and function-based characterization assays is vital for the identification of lead drug candidates, and there are many in vitro and in vivo platforms available to meet this need.

These platforms are also used for applications such as dose determination and combinatorial effects. As in vitro assays are commonly faster and less involved than in vivo studies, it’s generally recommended to test drug candidates in multiple assay systems.

Since immunotherapeutic drug candidates target various cell lineages and pathways, assays that have flexible readouts are often the most useful. For example, some drug candidates act mainly by modifying T cell activity, whereas others initially impact the myeloid cells.

In this post, I’m focusing on reviewing T cell modifier and dysfunction assays. Across the variety of assays available in this field, they are some challenges to overcome. In particular, in vitro assays that use primary cells face issues including a lack of standardization across research sites.

Here, we’ll look at peripheral mononuclear cell (PBMC)-based in vitro assays for functional characterization of immunomodulatory (including anti-inflammatory) candidate drugs, and discuss the new advancements which are addressing the challenges associated with these techniques.

The core of these assays is the recall antigen assay using whole PBMC from characterized donors. PBMC stimulated with mitogens or general (polyclonal) stimuli provide a functional readout for screening and characterization of immunomodulatory drug candidates.

PMBC-based assays have been used in the development of currently approved immune checkpoint inhibitors, to demonstrate the functional activity of their clones or lead drugs. However, these assays lack a standardized protocol, often suffer from poor reproducibility, and have low signal-to-noise ratio.

New advancements within this assay are now available to overcome these issues and provide a controlled and simple system for screening and characterizing drug candidates. Several parameters of the assay have been changed to optimize outputs, such as pre-screening and selecting “responder” donors, as well as optimizing assay conditions including:

Readouts have also been enhanced to include cytokines and measurement of expanded recall antigen-specific T cell clonotypes in using a cocktail of MHC tetramers.

There are many advantages of optimized and validated PBMC-based recall antigen assays. PBMCs are considered a surrogate of the innate and adaptive immunity of hosts, and to this end PBMCs provide essential cell lineages as a physiologically relevant assay system. Optimized assays use various cell lineages and subsets such as CD4+ T cells, CD8+ T cells, B cells, monocytes, dendritic cells, NK cells, and regulatory T cells.

The assay also has the co-inhibitory and co-stimulatory pathways and is amenable to many readouts:

The assays mentioned above are extremely useful, but they all lack one main point - the suppressed TME. The happiest antitumor T cell stays active until it meets the TME. This means that the most active T cell potentiating agents must be tested in a TME-like culture.

To fulfill this need, new assays are now being developed, based around major factors inducing TME-mediated T cell suppression. Adenosine is expressed in almost all tumor deposits and produces robust, and highly reproducible, T cell suppression in vitro without affecting cell viability. Adenosine exerts its powerful endogenous inhibitory effects on inflammatory processes via interaction with A1, A2A, A2B and A3 adenosine receptors.

A new adenosine/recall antigen-based in vitro assay system has now been developed and validated for functional characterization of many different classes of therapeutic candidates, providing a variety of readouts. The addition of adenosine improves the recall antigen assay by recapitulating the suppressed TME, and can be used to answer many drug development questions/problems, including:

The new assay also provides a screening platform for non-steroidal anti-inflammatory drug candidates, and to explore the off-targeting impact of drugs on adaptive immunity.

The recall antigen assay is arguably one the most physiologically relevant assays to identify the next generation of immunomodulatory drug candidates. This is due to the assay using naturally induced memory T cells and utilizing a controlled antigenic system.

However, since it uses primary cells, the assay presents many challenges including a lack of standardization, reproducibility, and supply. Improved recall antigen assays have now been developed, by addressing each step of the assay and its readouts, and through spiking with adenosine to recapitulate some aspect of suppressed TME.