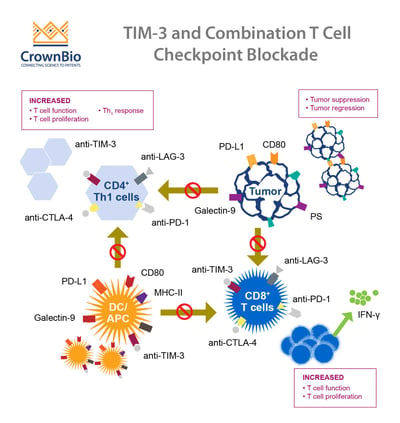 Unlike negative regulators, such as PD-1 and CTLA-4 (which have been proposed as therapeutic targets in different cancer types) the function of TIM-3 (T-cell immunoglobulin and mucin domain 3) in cancer has just begun to be studied and little is known about its role.

The TIM protein family is composed of three members in humans (hTIM1, 3, and 4) and eight in mice (mTIM1-8). TIM proteins are type-I cell surface glycoproteins composed of a signal peptide, an extracellular IgV domain, a mucin-like domain, a transmembrane domain, and an intracellular cytoplasmic tail.

All members share a conserved sequence homology in the IgV domain, while other domains demonstrate poor homology. The IgV domains of all hTIM proteins contain a high-affinity binding site for PS, a phospholipid constituent of eukaryotic membranes [1, 2].

TIM proteins are also implicated in the regulation of innate and adaptive immune responses. Particularly, TIM-3 is expressed on CD4+ T cells that secrete interferon-gamma (IFN-γ), CD8+ T cells, Treg, and innate immune cells (DC, NK cells, and monocytes). TIM-3 has also been proposed as a regulator of the Th1 type immune response. Evidence suggests TIM-3 has both negative and positive regulatory functions on diverse components of the immune response.

However, TIM-3 expression is not restricted to mononuclear cells, as it has also been detected expressed on distinct types of cancer cells, for example myeloid leukemia, sarcoma, gastric, cervical, and pulmonary cancer, and osteosarcoma. In many of these types of cancer, the increased expression of TIM-3 has been associated with disease progression and shorter survival.

In preclinical models, TIM-3 has been shown to be upregulated on TIL in mouse tumor models such as the CT-26 colon adenocarcinoma, 4T1 mammary adenocarcinoma, and B16-F10 melanoma models. Administration of TIM-3 mAbs alone had only a modest antitumor effect; however, combination of anti-TIM-3 and anti-PD-1/PD-L1 monoclonal antibodies significantly suppressed tumor growth [7].

These studies both support the potential of blocking TIM-3 in combination with other immune checkpoint inhibitors for cancer treatment [8, 9].

Clinical Development is at an Early Stage

Currently, only two TIM-3 antagonistic monoclonal antibodies are in early-phase clinical development (MBG453 and TSR-022). The safety and efficacy of MGB453 (Novartis, Basel, Switzerland) is being evaluated in the first-in-human, Phase I-Ib/II open-label multi-center study as a single agent and in combination with PD-1 mAbs in adult patients with advanced malignancies (NCT02608268).

TSR-022 (TESARO, Waltham, USA) is currently being evaluated as a single agent again in a first-in-human Phase I trial in patients with advanced solid tumors (NCT02817633), which will move on to explore the safety and clinical activity of TSR-022 as a monotherapy as well as in combination with an anti-PD-1 antibody in patients with selected tumor types.

These trials will be watched with great interest for both safety and efficacy readouts, to see if TIM-3 could be the next big thing in immune checkpoint inhibitors.

References and Further Reading on TIM-3: