How Are Organoids Different from 3D Primary Cell Cultures? 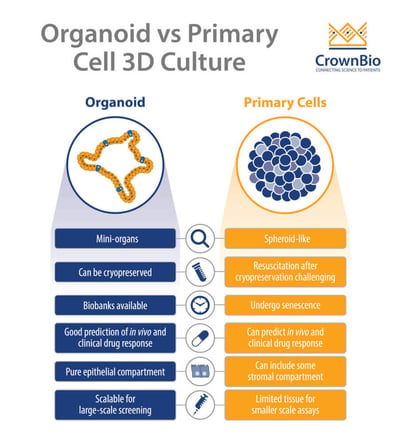 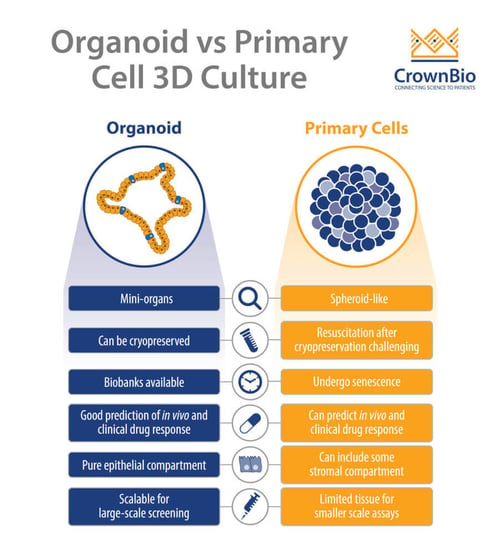 Explore the key differences between organoids and primary cells grown in 3D, from both healthy tissue and tumors. 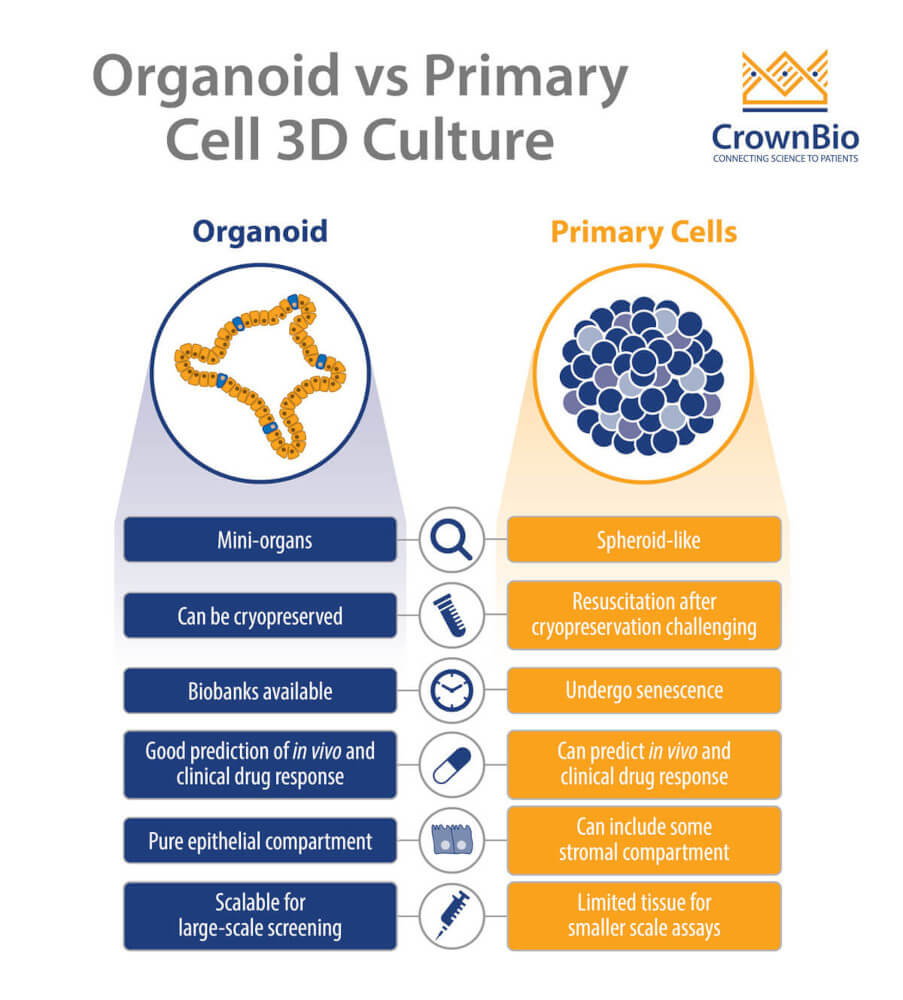 While 2D cultures are propagated on plastic as flat monolayers, 3D in vitro culture allows complex spatial interactions between cells in a 3D environment. This more closely recapitulates in vivo cell-cell contacts and original physiological conditions. This in turn provides a more relevant microenvironment, influencing cellular processes and therapeutic response. 3D culturing is also important for increasing the success of establishing an in vitro model system when using fresh primary cancer cells.

There’s a variety of 3D in vitro model options available using either cell lines or tissue from the clinic. Due to the lack of 2D cell line translatability, tissue from a clinical source is the gold standard and is used in different ways to develop model research systems. This includes generating complex organoids and 3D primary cultures.

As both models are generated directly from patient tissues (including tumors), they better reflect original tissue genetic make up and gene expression profile. However, there are some key differences between organoids and 3D primary cells which impact the typical applications for each model type, and which are reviewed below.

We’ve previously discussed how organoids are typically derived from adult stem cells (ASC) or embryonic stem cells (ESC) within an organ, and how this process has been refined by Hubrecht Organoid Technology (HUB) for both healthy and diseased tissue such as tumors.

Using HUB technology both organoids and tumor organoids can be easily generated, expanded, and banked, as well as scaled up for drug development applications including large-scale drug screens.

Importantly, patient-relevant tumor organoids also replicate patient response in the clinic, which adds high translatability to all their applications.

Further benefits of PDXO include rapid model development of large panels from multiple cancer types, subtypes, and mutations from the wide ranging collections of PDX already available. These PDXO panels capture the heterogeneity and diversity observed in the clinical cancer population, which is lacking in conventional in vitro cell line panels.

3D primary cell cultures leverage cells directly obtained from tissues and grown in either scaffold-based or scaffold-free systems. Cultures are established for a single cell type or a multicellular mixture from either a single tissue or different tissue types, including diseased tissue or tumors.

Primary tumor cells are expected to be much closer to the original tissue than conventional cell lines with key features including:

Other types of assay in which primary cells are used include methylcellulose clonogenic, soft agar clonogenic, and 3D tumor growth assays (3D TGA) all for specific objectives. For example the 3D TGA investigates the role of the tumor microenvironment (TME) in drug response. It involves embedding tumor cells in a low stiffness extracellular matrix (IrBME, Cultrex®) and co-culturing with hMSCs (e.g., IL-6, HGF) or CAFs to mimic the paracrine signaling present in the TME of solid tumors.

While organoids and 3D primary cell cultures can be both patient-derived, there are key differences between the model types.

HUB have fine-tuned these growth conditions to allow the development of tumor organoids from cancer stem cells from a spectrum of cancer types. Organoids can also be derived from matched healthy tissue to better control experimental data.

Organoids developed using HUB protocols are of epithelial origin. Primary cell cultures on the other hand consist largely of differentiated cells, and the culture conditions can vary between cultures making it more challenging to establish a robust culture from some cancer types.

Long-term, in vitro expansion of cells in culture needs an immature stem cell population to replenish dying cells. Since organoids are derived from, and maintain, a population of stem cells during in vitro culture this guarantees their long-term viability. Organoids also retain cellular composition, architecture, and genetic profiles over multiple passages.

In contrast, typical culturing conditions for primary cells are not optimized for long-term maintenance of the culture in vitro and cells tend to became senescent or drift over several passages.

Organoids have been successfully cryopreserved and can be maintained as living biobanks ex vivo without compromising their genomic and morphological identity. This allows for biobanks to be used for repeat studies.

Due to their key features discussed above, tumor organoids can be scaled up for large-scale in vitro drug screening, with more clinical relevance than current in vitro HTS platforms. Large-scale screening of multiple drug candidates and combinations simultaneously in this way saves time, effort, and money compared to in vivo screens.

Primary cancer cells can be used to evaluate the efficacy of anticancer agents in simple 3D assay systems. Similar to organoids, the cells can be established directly from patient tumors or PDX models. If using PDX, then the cells are depleted of any mouse stromal component before use.

Pairing in vitro organoid models with matched in vivo models (e.g. PDXO and matched PDX) provides a platform to better facilitate in vivo model choice, and allows transition from in vitro to in vivo studies using a matched, highly patient-relevant platform.

Organoids and 3D primary cell cultures are both superior to traditional 2D monolayer cultures as they provide a more physiologically relevant environment for cell-cell interactions and cellular responses. Both have successfully been utilized to harness clinical tissue as in vitro model systems and are becoming more widely adopted, particularly in cancer drug development and discovery. However, there are some key differences between organoids and 3D primary cell cultures which need to be understood in order to select the optimal research applications.

However, in comparison, organoids derived from stem cells provide additional advantages. These include physiological relevance of the original organ, amenability to long-term in vitro culture from both healthy and disease tissue, providing a heterogenous culture of stem cells and differentiated progeny, expansion to derive living biobanks of tissues, HTS, and more faithfully predicting patient response.

Adopting organoids in drug development embodies the patient in the lab concept across in vitro and in vivo and will accelerate decision making in the right direction for clinical benefit.