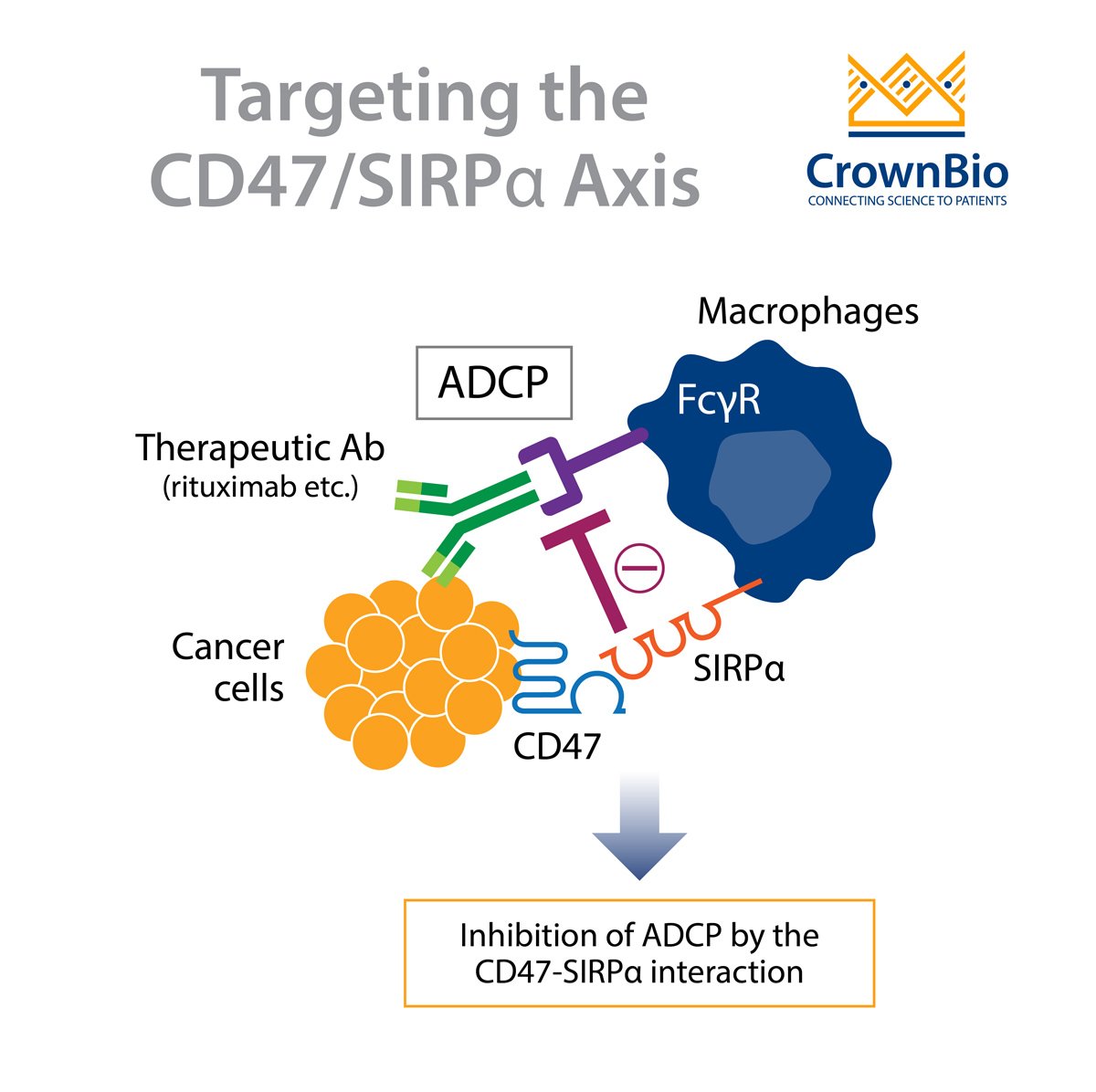 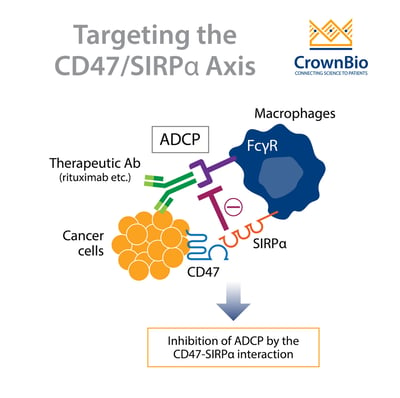 Explore why the CD47/SIRPα axis is an important immuno-oncology target and the methods being used to block this axis. 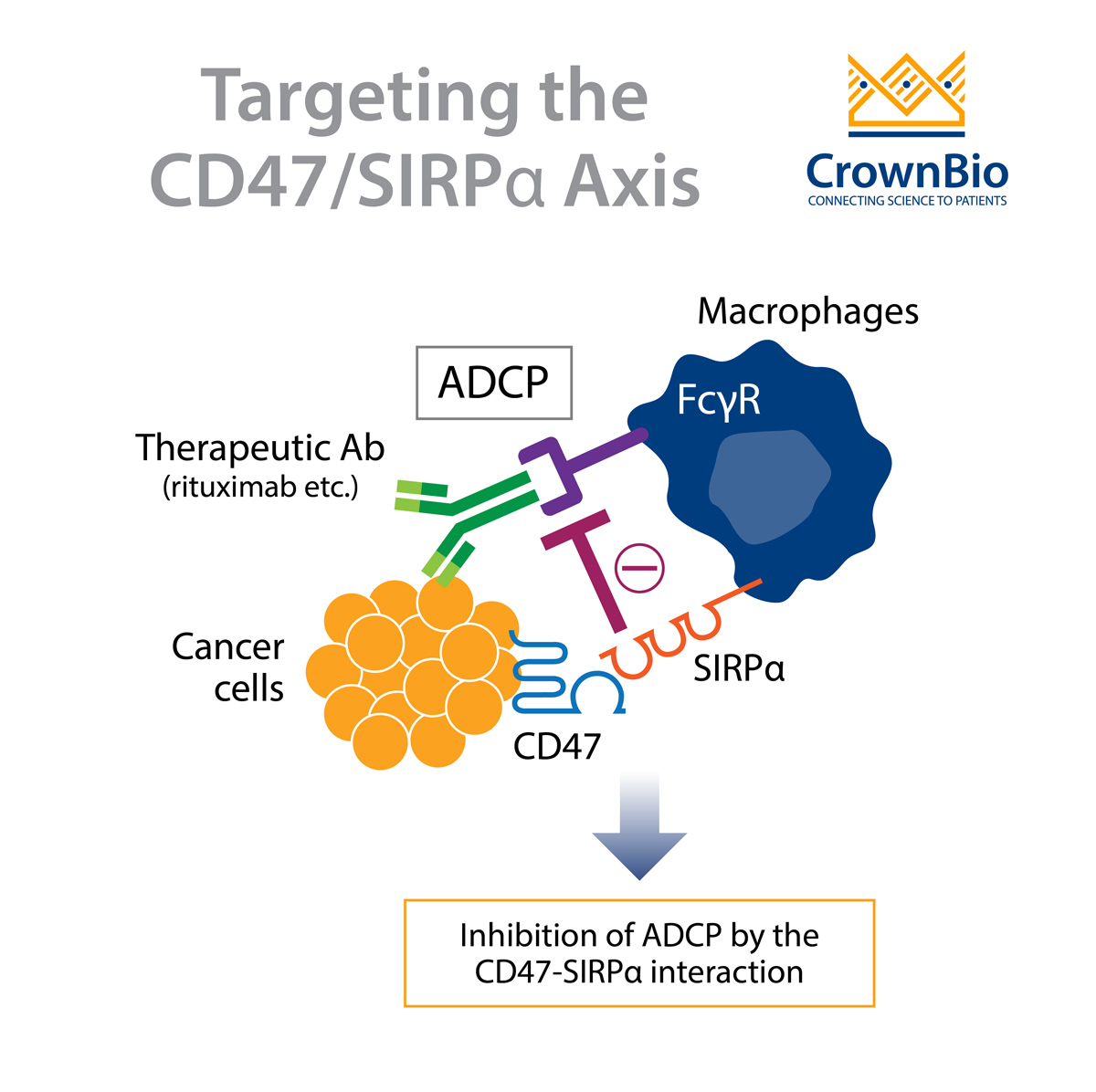 Immuno-oncology researchers are seeing success in the clinic with immunotherapies that modulate the adaptive immune system, such as T cell checkpoint inhibitors, CAR-T cell therapy, and T cell engagers. However, the innate immune system also plays a critical role in controlling tumor growth.

One important component of the innate immune system are macrophages. Macrophages inhibit tumor growth through phagocytosis of tumor cells. Tumor cells can evade surveillance by macrophages by upregulating a “don’t eat me” signal on their cell surface.

This signal is CD47, an immune checkpoint inhibitor that is ubiquitously expressed but is upregulated in various tumor types. CD47 is a 50kDa membrane protein that is a member of the immunoglobulin superfamily. By interacting with various ligands, CD47 has roles in the regulation of cell motility, adhesion, migration, and platelet activation.

How Do CD47 and SIRPα Interact?

However, it’s the interaction of CD47 on tumor cells with signal regulatory protein alpha (SIRPα) expressed on macrophages, that contributes to the inhibition of tumor cell phagocytosis. SIRPα is another member of the immunoglobulin superfamily and is primarily expressed on the surface of neurons and myeloid cells, including macrophages, granulocytes, monocytes, and dendritic cells.

The interaction of CD47 with SIRPα leads to downstream signaling events. This involves the phosphorylation of SIRPα and the inhibitory tyrosine phosphatases SHP-1 and SHP-2, which suppresses phagocytosis.

The CD47/SIRPα axis is therefore a known major pathway for immune evasion by tumor cells, and is being investigated as an immunotherapy target both preclinically and clinically.

The CD47/SIRPɑ Axis in Immuno-Oncology

Since formation of the CD47/SIRPα axis is important for tumor progression, blockage of this axis may be an effective mode of cancer therapy. Molecules developed to block this axis typically fall into one of three categories:

It should also be noted that there are efforts underway to combine CD47/SIRPα blockade with PD-1/PD-L1 blockade or other forms of combination therapy.

Most of the clinical trials that are currently underway involve molecules (antibodies or recombinant proteins) that target CD47 specifically. The indications that are being investigated include both solid and hematological malignancies.

The agents that target CD47 can be further classified into two groups based on whether or not the molecule retains an active Fc domain. CD47 blocking antibodies that retain an active Fc domain can initiate antibody opsonization. This activates antibody‐dependent cellular cytotoxicity (ADCC) or antibody‐dependent cellular phagocytosis (ADCP) which aids tumor cell destruction.

Molecules targeting either SIRPα or bispecific agents that target both SIRPα and CD47 can be designed to elicit the ADCC and ADCP effect by possessing functional Fc domains. Since SIRPα is more restricted in its expression compared to CD47, these molecules should not have as many hematological events as those targeting only CD47. However, there is concern about neurological events due to the expression of SIRPα on neurons.

Another avenue being explored is the development of bispecific agents that target CD47 and another tumor-associated antigen (TAA). These agents can either be bispecific antibodies or fusion proteins. TAAs that have been tested preclinically include PD-L1 and CD19.

Tumor cells use the CD47‐SIRPα axis as a mechanism to evade immune surveillance, blocking their phagocytosis by macrophages and other members of the innate immune system. Preclinical studies have shown that blocking either CD47 or SIRPα with monoclonal antibodies or recombinant proteins may be an effective anti-tumor therapy.

Such therapies are currently being investigated in the clinic, either as monotherapies or in combination with other oncologic agents against a variety of cancers. However, the underlying mechanisms of the immune system response to CD47 or SIRPα blockade, as well as the possible adverse clinical effects, are still being fully elucidated. Notwithstanding, targeting the CD47‐SIRPα axis shows potential as an additional strategy for immunotherapy of cancer.