Key Discoveries in the Development of Modern HUB Organoids 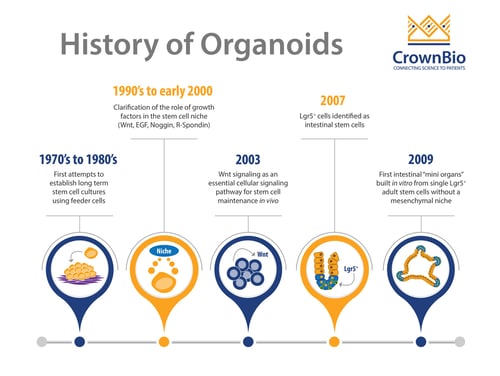 Learn about the key research discoveries leading to the development of modern HUB Organoids.

Milestone Discoveries in the Development of HUB Organoids

The first ex vivo stem cell expansion studies focused on establishing long-term stem cell cultures to model human development. These efforts date back to the late 1970s and early 80s, when adult keratinocytes or embryonic pluripotent cells were co-cultured with a layer of fibroblast feeder cells. These provided a cellular source of undefined stem cell niche factors, though this was unknown at the time.

Despite these efforts, stem cells grown in the presence of feeder cells quickly became genetically unstable and lost their full differentiation potential. This means that in vitro differentiation could be somewhat limited and unpredictable. As a precautionary step, cultured (putative) stem cells were transplanted into mice to see whether they still possessed stem cell defining characteristics of: 1) the capacity to self-renew and 2) differentiation into multiple lineages.

Subsequent Milestone Discoveries: Enhanced Understanding of the Stem Cell Niche and the Regulation of Stem Cell Self-Renewal and Differentiation

The first milestone published by the Clevers lab, was the discovery of Lgr5 as a biomarker to identify adult intestinal stem cells. This discovery allowed the characterization, purification, and in vitro expansion of the first ASCs.

The observation that these ASCs proliferate and can be maintained in long term culture led to using isolated Lgr5+ stem cells as a putative cellular source for organoid cultures. This seminal work resulted in developing the first gut “mini-organs” (specifically, crypt-villus organoids).

The second major discovery was an enhanced understanding of the stem cell niche, and of the factors that regulate stem cell self-renewal and differentiation. This key aspect meant that feeder cells were no longer required. Instead, the stem cell culture environment is simply supplemented with organ-specific cocktails of growth factors.

The Clevers research group shattered the common dogma by showing that self-organizing near-native intestinal epithelial structures could be generated from single stem cells in the absence of a mesenchymal cellular niche.

While HUB Organoids do faithfully recapitulate human epithelial organ morphogenesis and pathogenesis, they lack the communication between organs found in complex in vivo organisms. Specifically, for a disease such as cancer, co-operation between the tumor itself and the immune system is crucial for disease establishment and progression. Both cancer and immune cells are therefore needed to effectively evaluate immunotherapies.

Modern organoid cultures are the result of several historical research discoveries, including early studies showing stem cells could be cultured in vitro, followed by later studies that improved our understanding of the stem cell niche and the regulation of stem cell self-renewal and differentiation.

Today, optimized HUB Organoid protocols are widely used to generate robust and reproducible organoid cultures that can be maintained long-term in vitro.