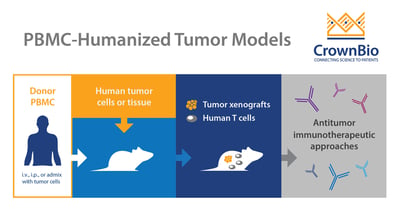 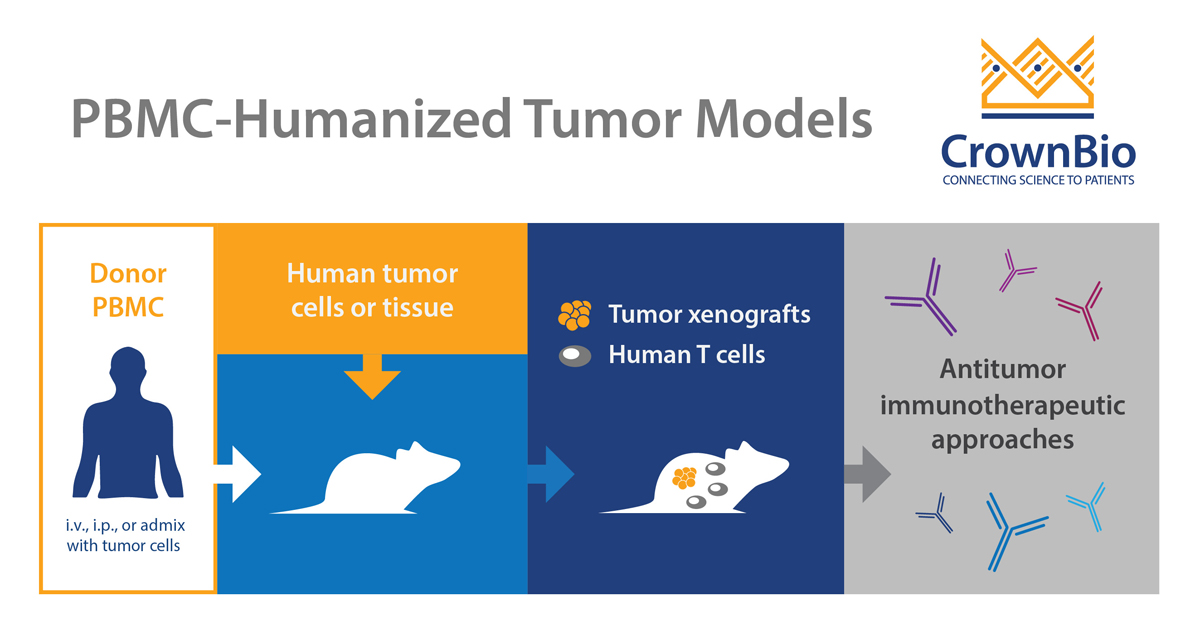 The Need for Humanized Models

As immuno-oncology continues to dominate cancer research, there’s an ever-increasing need for new and improved models for preclinical testing. When assessing the efficacy of human-specific agents, preclinical models with a human immune system are needed.

What are PBMC Humanized Tumor Models?

Models humanized with PBMC are an alternative to costlier, full hematopoietic stem cell (HSC) reconstituted models, which can also be engrafted with human tumors.

How are PBMC Humanized Models Developed?

The starting point is an immunocompromised mouse strain, such as NOG®, NOD/SCID, or NCG. These different mouse strains have various levels of receptivity to PBMC, and a good knowledge of this can help to guide mouse selection for PBMC humanized tumor model development.

PBMCs, or peripheral blood mononucleated cells, are defined as any blood cell with a round nucleus, and include lymphocytes, monocytes, and macrophages. Ideally, fresh PBMC sourced from hospitals are used for humanization for a more patient-relevant analysis. Due to the inherent variability between human donors, at least two different PBMC donors should be used per developing model/inoculation.

Alternatively, PBMCs can be bought commercially, reducing variability and allowing you to go back to the same PBMC source for repeat studies.

The establishment of PBMC humanized tumor models requires optimization. This finds the right balance between tumor cell and PBMC concentration to allow sufficient tumor growth before an immune system reaction kicks in.

Optimization also includes finding the best inoculation route for both PBMCs and the tumor, for each individual PBMC/tumor combination. The human PBMCs can either be admixed or sequentially added to the immunocompromised mouse with the xenograft tumor of choice. PBMC administration routes include i.v. or i.p., or s.c. when admixed with tumor cells.

All of this results in optimal tumor engraftment paired with optimal immune cell reconstitution on a model-by- model, and even study-by-study basis. The final model is fully optimized, providing a human tumor within an animal with partially reconstituted human immunity, ready to test human-specific immunotherapies in vivo.

Which Immune Cell Populations are Reconstituted?

As noted above, these models provide partial human immune system reconstitution, so what exactly does this look like?

T and NK cell populations are reconstituted, which can be found in blood and tumor samples by FACS analysis. B cells are also reconstituted but are not necessarily identifiable in peripheral blood. This is because they are cleared faster than the T and NK cells.

In certain circumstances, under sensitization and challenge, B cell antigen response and antibody production are seen.

Which Cancer Indications are Available?

The choice of xenograft tumor model is limited by the development of graft vs host disease (GvHD) in this model type (discussed in more detail below). This means you need to use a tumor model which takes and grows within the short model timeframes available. Traditional cell line derived xenografts are therefore generally used.

Given the wide availability of human tumor cell lines, PBMC-humanized tumor models have been established for many cancer types. This includes breast, colon, esophageal, liver, lung, ovarian, prostate, and tongue cancer, as well as leukemia, lymphoma, and melanoma.

The inoculation route is often subcutaneous, although some orthotopic models are available. If the xenograft model you need isn’t already developed, this can often be created bespoke to meet your study needs.

What are the Strengths and Uses of PBMC Humanized Tumor Models?

Even with their complexities, PBMC humanized models are still a faster and simpler approach to humanization than HSC humanized systems. This means huPBMC tumor models can provide more cost-effective studies.

They are valid models for short term studies, or studies needing a high throughput. PBMC humanized tumor models are also useful for initial agent selection, stratification, or proof of concept validation before moving onto a full humanized study.

Models are already available and optimized for a range of solid tumors and blood cancers, often benchmarked with common immuno-oncology agents like immune checkpoint inhibitors.

Which Agents Can I Assess with PBMC Humanized Models?

What are the Challenges of PBMC Humanized Models?

PBMC humanized tumor models do come with some challenges, although these can be worked around and overcome.

As discussed above, variability can be an inherent issue when using fresh PBMC, because each individual’s PBMC provides an individualized response or lack of response. This is overcome by using at least two PBMC donors per study, and with studies being repeated with different donor pairs.

If using PBMC from hospitals, there can be an issue with repeat supply – a donor may not be available for repeat or new studies. Using commercial supplies can be a workaround, allowing you to revisit the same donor. Commercial PBMC are often supplied frozen, but model validation has shown that frozen PBMC produce comparable immune cell reconstitution to fresh PBMC.

Another challenge with using these models is the occurrence of graft versus host disease (GvHD). This is caused by human donor-derived immune cells responding to mouse antigens and occurs around three weeks post-huPBMC inoculation. This leaves you with a short treatment window – often from ten days to three weeks to complete an efficacy study.

GvHD should be taken into account before you start a study with this model type, and plays a role in the types of study you can perform. It means PBMC humanized tumor models are ideal for a short proof of concept study, but you wouldn’t use them for longer studies, say to test memory response or with slow growing tumors.

Improved models are being assessed to overcome GvHD, for example major histocompatibility (MHC) class I- and class II-deficient mice have been reported to have delayed GvHD development. Using these mice as the basis of the models could therefore expand the therapeutic window.