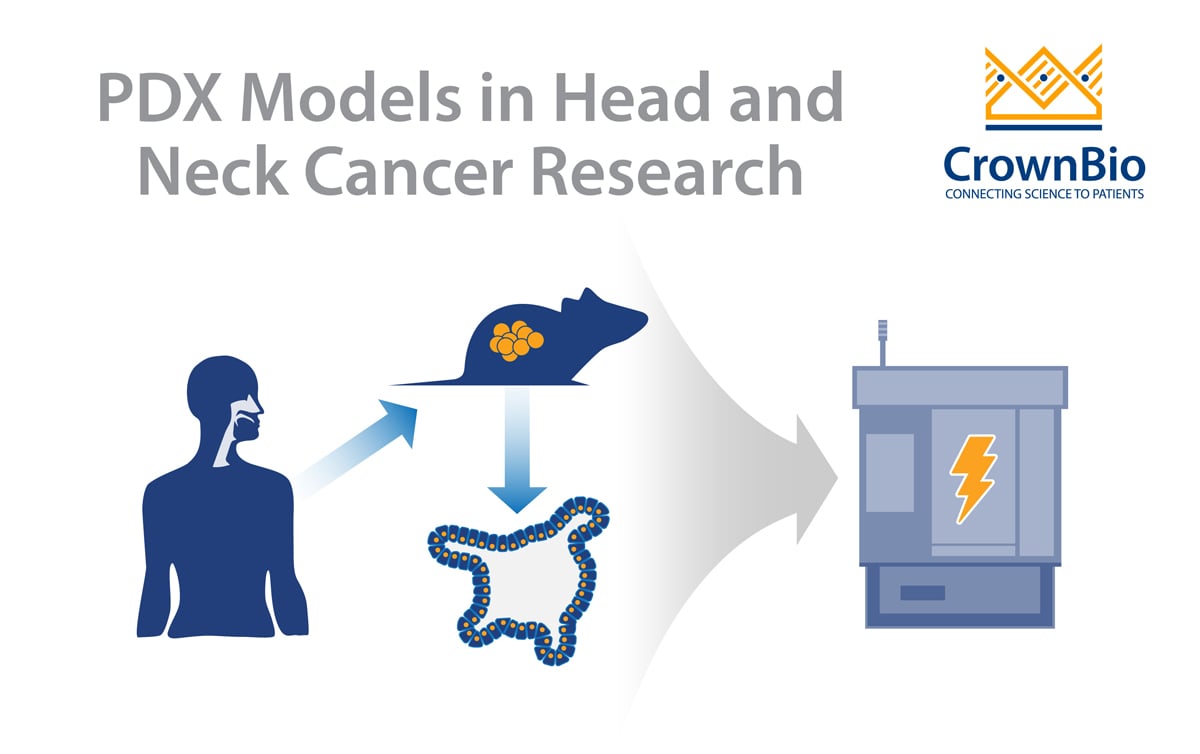 Explore why patient-derived xenografts (PDX) are an important model in head and neck cancer research, particularly for studying radiation response and deriving next generation organoids. 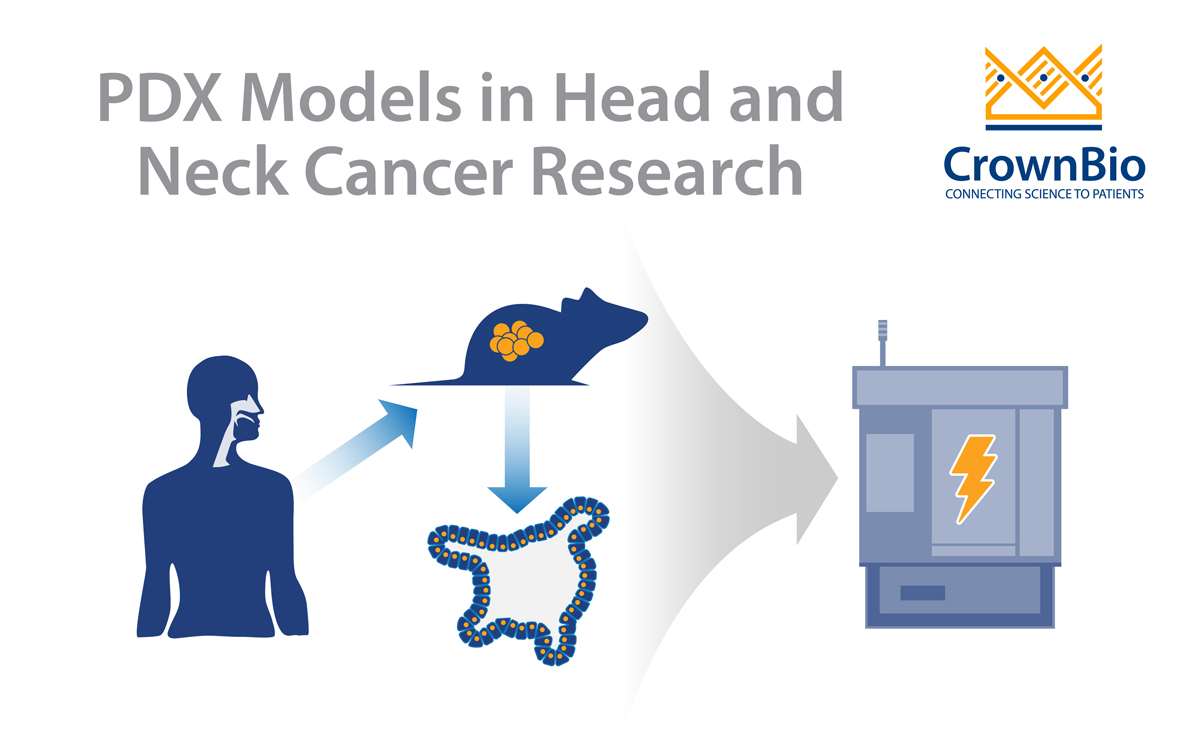 What are Patient-Derived Xenografts?

Patient-derived xenografts (PDX) are an advanced xenograft model, derived directly from patient tumor tissue and never adapted to grow on plastic (unlike conventional “cell line derived” xenografts). PDX advantages over traditional xenografts include maintaining the genetic features of the parental tumor and reflecting the heterogeneity and diversity of the human patient population.

Within drug development and oncology research PDX have many uses, such as drug efficacy testing (including novel targeted agents due to recapitulating unique clinical features), large scale use in mouse clinical trials to identify responder subgroups, and also for biomarker discovery.

The Importance of PDX in Head and Neck Cancer Research

As well as the points identified above, PDX models have some specific benefits in head and neck cancer research and drug development, particularly for studying radiation response.

PDX have been developed from a range of tumor types for head and neck cancer. This includes:

As for PDX from other cancer types, original tumor genetic and phenotypic characteristics are recapitulated. For head and neck cancer this includes viral oncogene expression in HPV-positive tumors.

Importantly, when treating HPV positive/HPV negative PDX the response is consistent with the clinic, with HPV positive PDX models being more sensitive to radiation treatment. The developed PDX can also be used to predict patient response to targeted agents, allowing studies which are both biologically and clinically relevant.

Orthotopic head and neck cancer PDX have been shown to provide a more “natural” tumor microenvironment than subcutaneous implantation. This allows for clinically relevant disease development, including metastases to both the lymph nodes and lung for head and neck cancer.

One benefit of using PDX for radiation response studies over murine models is the use of human tumors. There are major differences between human and rodent cells in how they fundamentally regulate response to radiation. Activities and levels of DNA damage response mediators such as DNA-PK, Ku70, and Ku86 differ between species, and human cells are generally more efficient at checkpoint activation and less sensitive to oxidative stress. To make preclinical studies as translatable as possible, using human, clinically relevant cell lines is therefore the best starting point.

PDX models allow radiation response studies, for head and neck cancer as well as looking at simultaneous radio- and chemotherapy treatment, which mimics the clinical setting. For administering radiotherapy, small animal systems provide the opportunity to fractionate the dose given to PDX models e.g. 2 Gy daily fractions mimicking patient treatment. The total radiation dose received by model is, however, usually less than the overall clinical dose.

Another key utility of PDX models in head and neck cancer research is that they provide a renewable source of cancer cells for organoid model generation.

Tumor organoids are derived directly from patient tissue or from PDX models. The major limitations of using patient tissue are access, strict regulations, and a non-renewable tissue source for repeat studies. This is overcome by instead generating tumor organoids from PDX models, which provide expanded availability of models, a wealth of cancer cells, and an enhanced translation from matched in vitro organoids to in vivo PDX.

Limitations of PDX in Head and Neck Cancer Research

All preclinical models have some limitations, and the drawbacks of PDX in head and neck cancer research are mainly inherently those of PDX.

The models are usually used with immunocompromised mice. This doesn’t provide a host anti-tumoral immune response which is needed for response to chemoradiation, and doesn’t provide a platform for testing immuno-oncology agents. These pitfalls can start to be overcome by using PDX within a humanized mouse model.

PDXs are often established from tissue generated from surgical removal of a tumor. This means you can’t test the PDX in comparison to the patient – to find out if the patient and derived model respond to a treatment in the same way.

Multiple passages can lead to potential biological changes and a loss of stroma in PDX models. This can be overcome by model banking and use at low passage numbers.

Head and neck cancer specific limitations include engraftment rate based on HPV status. HPV-negative tumors engraft marginally better than HPV-positive tumors, and this can be a drawback for studying virally induced disease.

To progress head and neck cancer research, clinically relevant preclinical models such as patient-derived xenografts (PDX) are needed. PDX bring many advantages over historically used in vivo models, and are an excellent gateway to generating next generation models such as tumor organoids. 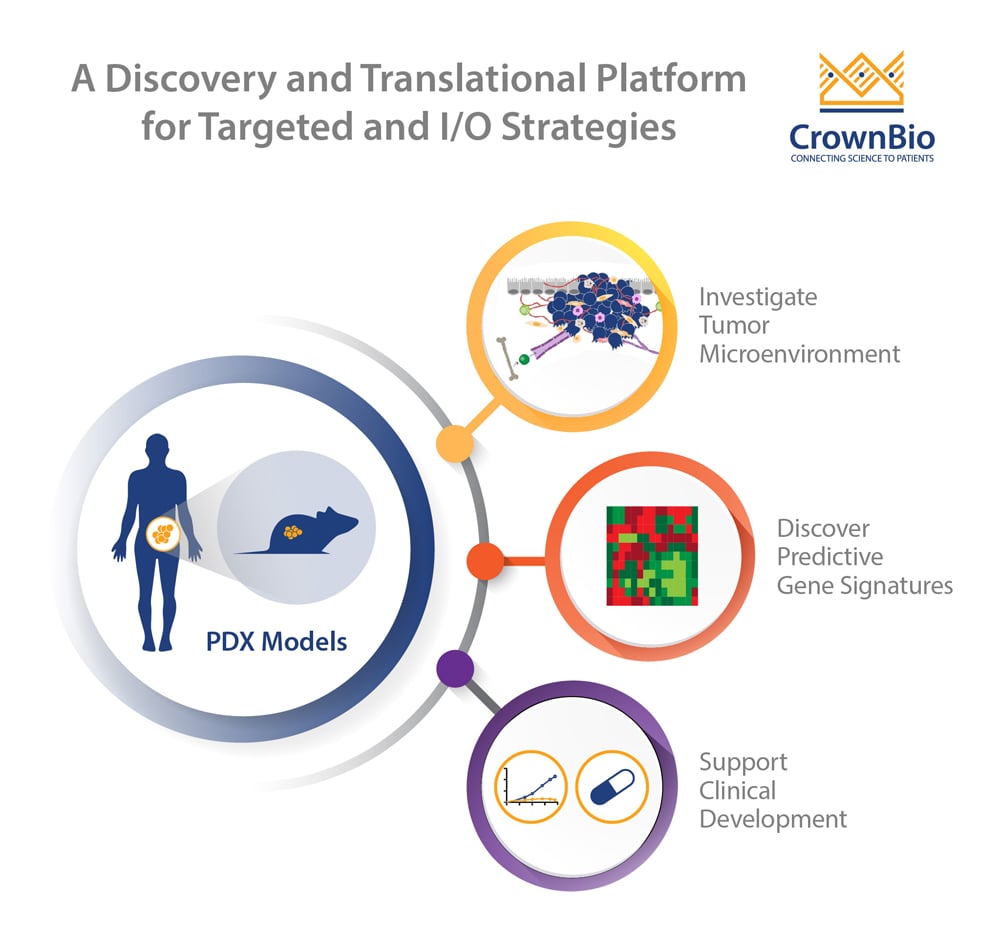