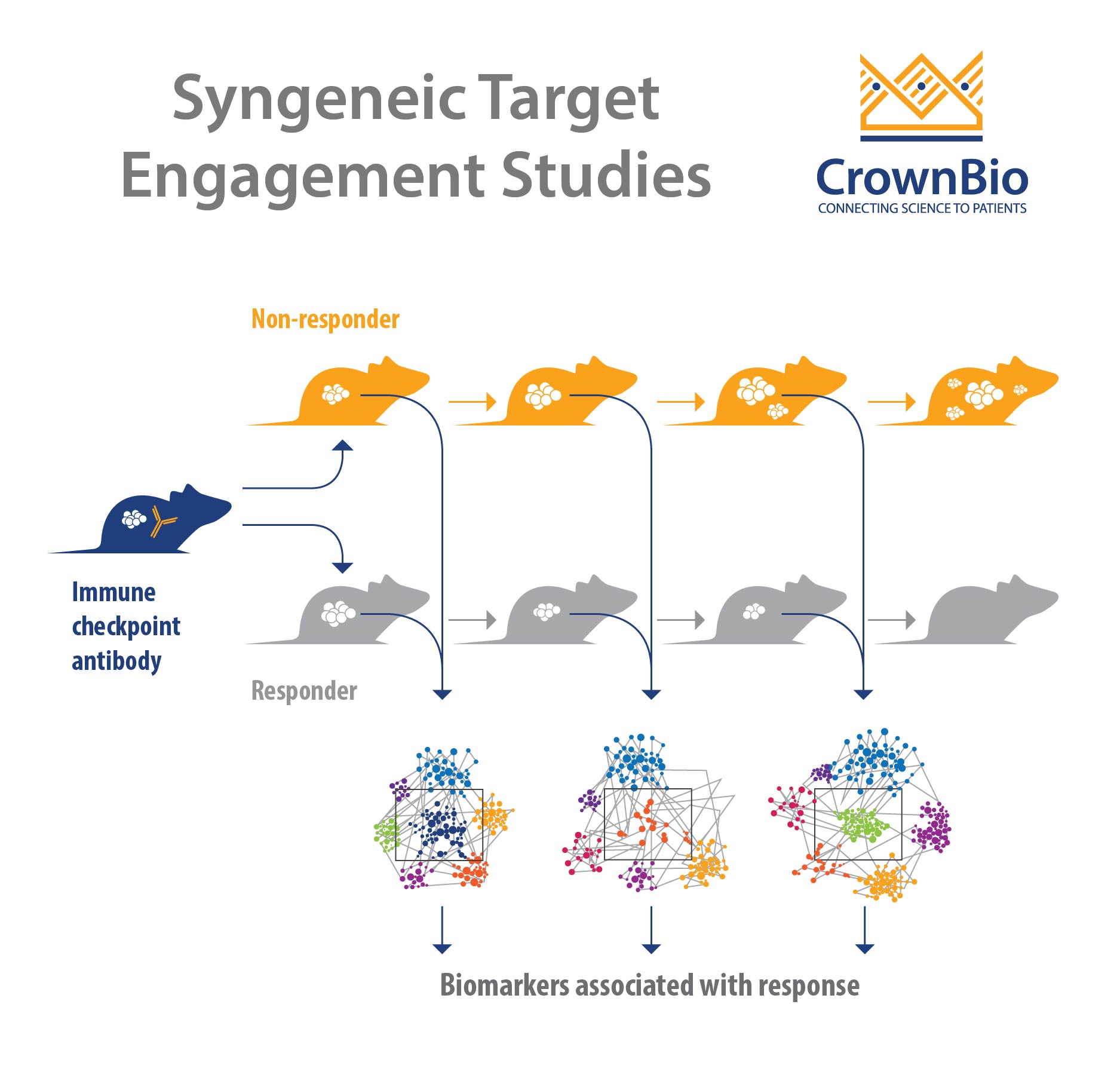 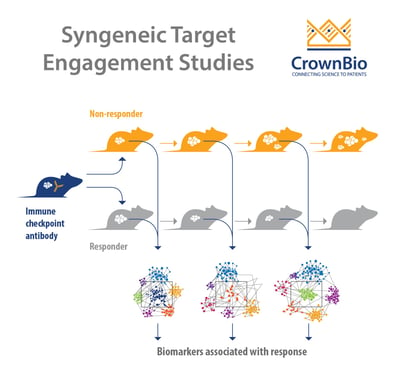 Syngeneic tumor models are a rapid and high-throughput option for novel drug discovery. Here’s how to use them for immunotherapy target engagement studies.

What Are Target Engagement Studies?

Target engagement studies investigate the mechanism of action (MOA) and pharmacodynamics (PD) of a potential new drug. They are typically conducted after the feasibility of an approach has already been established through proof of concept (POC) studies.

Target engagement studies aim to identify biomarkers and correlative endpoints. These endpoints don’t represent direct clinical benefit but may help predict outcomes. Recently, there’s been an increased appreciation of correlative endpoint value, as they appear to affect the likelihood of patient response to immunotherapy.

Due to the complex properties of the wide range of different immunotherapies, it’s become clear that they don’t fit traditional clinical trial rules. This means that novel predictive response criteria around MOA and PD need to be developed.

For example, there‘s increasing evidence that clinical trial endpoints, such as overall response rate and progression-free survival outlined by RECIST, may underestimate the benefit of immuno-oncology agents. Also, using PD-L1 expression as a biomarker has not been enough to fully explain why some patients without strong PD-L1 tumor expression show a durable clinical benefit.

This is in stark contrast to conventional PD, where drug action is contained within a single target cell and the effect is more immediate.

In order to assess immunotherapy target engagement, a competent immune system is necessary. The use of syngeneic models enables the evaluation of MOA and PD of murine surrogate immuno-oncology agents.

To design a thorough, comprehensive target engagement study, multiple take down time points and cohorts are necessary. Syngeneic models are ideal for this purpose, as they are rapidly and cost-effectively established in a large enough scale.

How to Use Syngeneic Models for Target Engagement Studies

Immune and genomic profiles of treated/untreated or responder/non-responder animals are characterized to identify MOA and PD properties of a drug.

When choosing a model, it should be kept in mind that different tumor models have different baselines of number and type of infiltrating immune cells. Furthermore, the baseline may change over tumor progression.

For example, within seven days a tumor bearing model can go from a:

These factors need to be carefully considered. They can provide insight into potential predictive biomarkers based on the model response to therapy seen in proof of concept studies.

We’ve previously discussed that variability in tumor growth kinetics is due to the complexity of the immune system, and its tumor interaction. Unsurprisingly, there are variations among individual tumor immunophenotypes within the same treatment groups.

Similar to designing POC studies, statistics help to determine the number of animals needed for a meaningful target engagement analysis. A key point is to understand the degree of treatment efficacy variability at the POC stage. This helps to guide the number of animals (‘n’) necessary to achieve statistical significance in follow up target engagement studies. The stronger the efficacy, the less mice are needed to achieve statistical significance.

For example, if you see that all mice respond to a drug at the POC stage, then the target engagement study design is simple – evaluate the biomarker difference between control and treatment animals.

An important factor to keep in mind is that it’s difficult to follow the PD of individual animals. Flow cytometry is primarily a terminal analysis – meaning that the same animal is not available for subsequent time points. Biopsies are typically avoided since they may not be representative of tumor heterogeneity.

Sampling from peripheral blood can be one way to work around the limitation of terminal TIL sampling, though TIL has been more predictive in the clinical setting. Or mean values are often used to measure correlation between PD and efficacy (TGI) at a specific point in time, such as the example here.

Another point to consider is tumor size at the time of analysis. Viability and flow cytometry gating strategies may suffer in large tumors due to necrosis. This can pose an issue for control arms (which may grow bigger than treated arms), if sampling at efficacy study terminal endpoint in the hope of correlating immune markers to response. Because of this limitation, rigorous optimization should be carried out on a model-by-model basis, and the use of sampling guidelines are recommended for target engagement studies.

Lastly, while most syngeneic tumor models offer a two to three week treatment window, this may not be sufficient to observe some immune responses. Due to non-linear response kinetics, signatures of response or any potential adverse events may manifest later, well past the allowable animal welfare endpoint criteria. Slower growing models such as Pan02 help combat this issue. Alternatively, treatment groups can be kept on study after the control animals have been taken down.

A carefully thought out target engagement study reveals the PD and MOA of your drug and guides the inclusion of biomarkers into immunotherapy clinical trials. Integration of immunophenotyping and genomic analysis also helps identify patients more likely to respond to immunotherapies.

Increasing evidence suggests that a single biomarker (e.g. PD-L1) may not be sufficient. As a next step, you may want to take a meta-analysis approach to evaluate correlation between multiple immune biomarkers and response. Or perhaps you may look at the spatial relationships between biomarkers in the context of each cell’s biological role.

Ultimately, embracing the complexity of the underlying biological response to immuno-oncology agents will set you on the path to clinical success.