Published on November 10, 2022 by Marianne Baillargeon

Drug development is a lengthy, risky, and costly endeavor with high candidate attrition. Attrition rates for anticancer agents are much higher than in other therapeutic categories. Only 5% of them are estimated to reach the clinical stage. This very high rate has been attributed in part to the poor translatability of current preclinical data.

In this post, we examine how enhancing the predictivity of cancer drug discovery with 3D in vitro organoids, as opposed to traditional 2D monolayer culture systems, more closely recapitulates the complex in vivo environment. Using these organoids enables “clinical trials in a dish,” which can improve and accelerate cancer drug discovery.

Cancer Is a Highly Heterogenous Disease

Cancer has a complex etiology; tumor cells are continually acquiring new mutations. Complicating matters further, cancer is highly heterogenous. It can differ greatly among patients with the same broad type of cancer (intertumor heterogeneity) and within each patient (intratumor heterogeneity). This heterogeneity makes identifying the most appropriate drug targets difficult and lengthens the drug discovery process. It is also believed to underlie the lack of response and drug resistance often seen in the clinical setting.

Developing effective drug candidates requires a thorough understanding of tumor heterogeneity in patient-relevant and predictive preclinical models that reflect cancer’s cellular and population-level diversity. Patient-relevant tumor organoid models are now being used to overcome the poor translatability of other in vitro culture systems. They have better translatability and predictivity while being amenable to high-throughput screening (HTS).

Organoids are microscopic self-organizing structures that recapitulate the complex structural and functional properties of the original in vivo tissue. Optimized Hubrecht Organoid Technology (HUB) protocols based on the original work of Hans Clever are used to develop models from both normal and diseased tissue, including tumor tissue (see here for a more in depth discussion on HUB tumor organoids).

Instead of requiring organ-specific adult stem cells, researchers using the HUB approach can cultivate organoids from any tissue containing epithelial cells, such as the liver, intestine, lung, thyroid, stomach, and kidney. HUB organoids do not require reprogramming or cellular transformation. That feature helps preserve the original gene expression patterns and epigenetic makeup of the tissue, including relevant mutations that provide important information about disease pathogenesis. Furthermore, using a single optimized protocol to derive organoid models from different tissues not only simplifies the derivation process but also greatly enhances reliability and reproducibility.

HUB organoids are developed using extracellular matrix signals that mimic the local environment of the parent tissue to closely recapitulate the in vivo microenvironment. The models can be generated directly from patient-derived organoids (PDOs) or from patient tissue expanded in mice as patient-derived xenograft organoids (PDXOs). Both represent an alternative to working with primary patient cells. Both can serve as patient avatars because they have been shown to faithfully recapitulate the genomic, morphological, and pathophysiological characteristics of the parental tumor. Furthermore, tumor organoids are more easily scalable than in vivo models. They are genetically and phenotypically stable even after long-term culturing and cryopreservation.

In 2019, Crown Bioscience entered into a strategic partnership with HUB to become the exclusive provider of HUB technology for preclinical oncology drug development and validation.

A Library of Indications

This partnership has resulted in a diverse tumor organoid library, OrganoidBaseTM. Researchers can access a cloud-based searchable database of patient-relevant PDXO tumor models for a range of cancer types, including breast, colorectal, and pancreatic. These models are annotated with related histopathology, IC50, genomic, and transcriptomic analysis data.

OrganoidBase houses both diseased and matched healthy organoids from the same patient for each oncology model. These pairs offer a robust platform for drug discovery because they allow researchers to explore disease-relevant targets, screen lead compounds, analyze drug responses, and predict therapeutic outcomes earlier in the process. Extensive and well-characterized tumor organoid biobanks can improve the patient relevance of lead compounds with in vitro data that is more translatable.

Tumor organoids can be grown in multi-well plates for HTS and analysis on multiple drugs simultaneously. This method can also validate the effectiveness and toxicity of lead candidates across organoid models, such as those derived from matched healthy tissue and/or different genetic backgrounds. 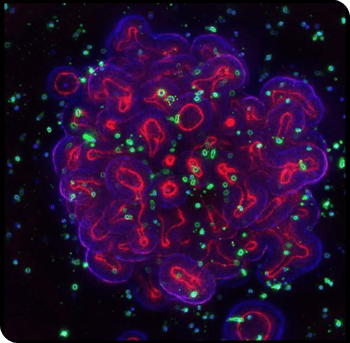 After identifying potential drug targets with in vitro organoid models, researchers can use PDX models to evaluate performance at a systemic level. Pairing in vitro and matched in vivo models is not always possible with primary cells. This represents another distinct benefit of tumor organoids in drug discovery. In vivo matched models can be used in a complementary fashion to allow for efficient transition from early in vitro studies to late-phase animal-based validation trials.

Tumor organoids can be PDOs or PDXOs. However, the latter enable expanding PDO collections for population studies (by generating new models from existing PDXs) and facilitate the transition from in vitro to in vivo using unique matched models. Furthermore, new in vivo PDX models can be developed from established PDOs as a secondary way to generate new matched pairs, which is especially relevant with engineered organoids to establish PDX models.

As an example of combining 3D in vitro organoids and matched PDX models, Verissimo et al. generated a panel of colorectal tumor organoids that harbored either wild-type or mutant RAS, as well as normal organoids and tumor organoids with a CRISPR-introduced oncogenic KRAS mutation. RAS pathway inhibitors were assessed, including drug combinations being tested clinically against RAS mutant cancers. Overall, mutant RAS was strongly associated with resistance to these therapies. In vivo drug response of was then evaluated using xenotransplanted RAS mutant organoids to confirm the in vitro findings.

3D tumor organoids are more patient-relevant compared to traditional 2D cell culture systems commonly used in HTS. They are also more readily scalable compared to in vivo PDX models. These 3D in vitro tumor models faithfully recapitulate the genomic, morphological, and pathophysiological characteristics of the original tumor. They are genetically and phenotypically stable even after long-term culturing and cryopreservation.