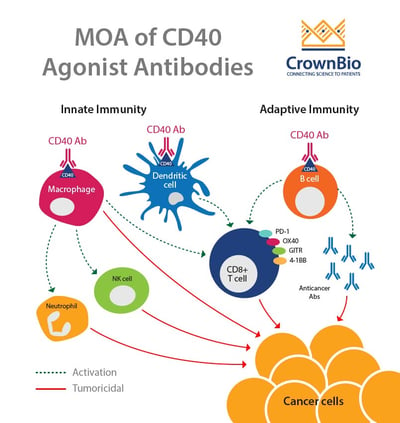 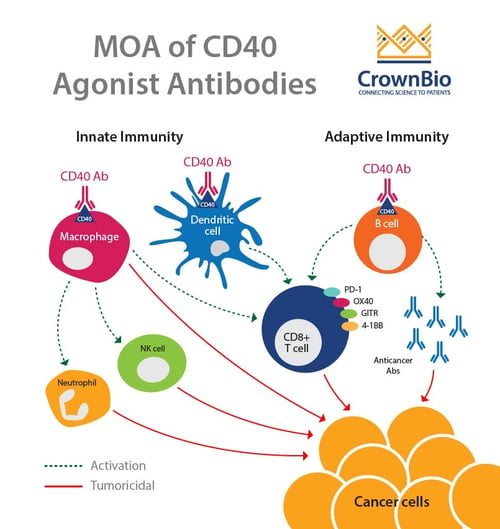 Explore the role of CD40 in cancer immunotherapy, including its background, functions, and why combination regimens may be key to targeting this checkpoint. 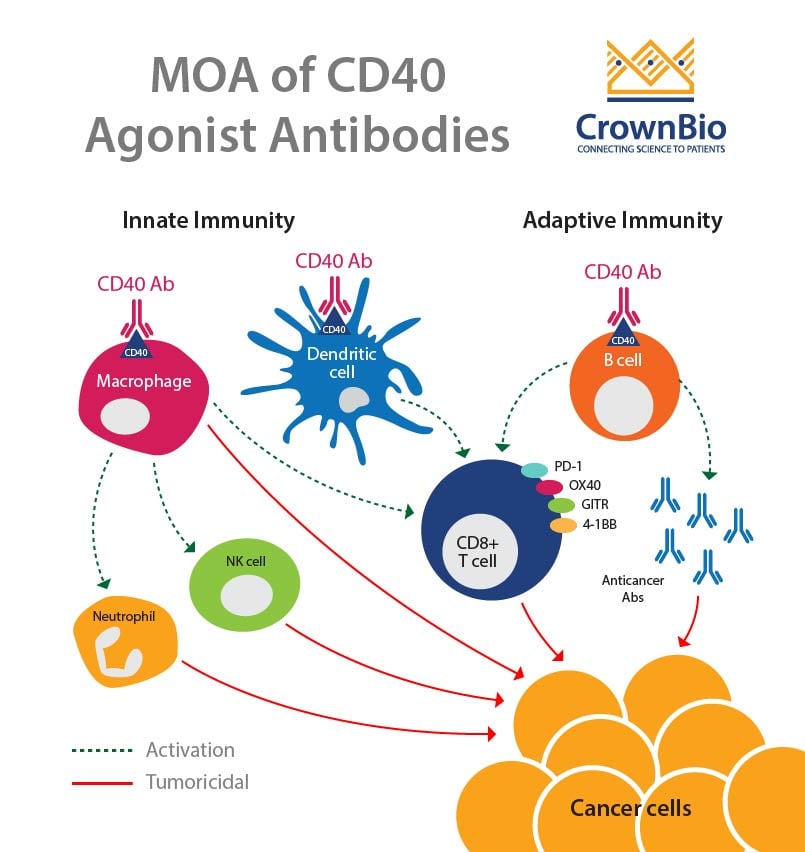 The Rise of Immunotherapy

Cancer treatment is in an “Immune Revolution”. Clinicians and patients are seeing relative success with a class of cancer drugs whose mechanism of action is to boost the immune response to cancer. These immunomodulatory drugs target molecules that fall into, but are not limited to, two main groups:

Examples of molecules in inhibitory pathways include CTLA-4, PD-1/PD-L1, LAG-3, and TIM-3, as well as non T cell-associated molecules like CD47, TGF-beta, and PI3K-gamma. These were the first group of molecules to be targeted and a number of drugs targeting this pathway have already been approved.

CD40, along with OX40, ICOS, and CD137, are examples of co-stimulatory molecules. There is now a lot of interest in targeting this pathway, with numerous antibodies currently being evaluated in the clinic. Therefore, there’s also a need for improved preclinical models to evaluate these types of drugs.

Most of the molecules in the two aforementioned pathways, that are targeted by immunomodulatory drugs, are typically expressed on T cells. CD8+ cytotoxic T cells (CTLs) are one of the main cell types responsible for tumor clearance. In order for them to exert their tumor-killing activity, CTLs have to be activated.

There are three signals generally required for a CD8+ cytotoxic T cell to be activated against a tumor:

CD40 is member of the tumor necrosis factor receptor (TNFR) family, which also includes 4-1BB (CD137), OX40 (CD134), GITR (CD357), and CD27. CD40 is constitutively expressed on APCs such as B cells and dendritic cells. It is also expressed on other hematopoietic cells including T cells and macrophages after cellular activation. CD40 expression can also be found on endothelial, CNS resident, and some tumor cells.

The receptor for CD40, CD40L (CD154), is expressed on T cells and platelets. However, during inflammation, CD154 can also be expressed on B cells, DC, monocytes, macrophages, and a host of other cell types.

Since the interaction between CD40-CD154 is an immune checkpoint regulating both humoral and cellular immune responses, it has been implicated as a druggable target in a host of immune-related diseases. Modulating the CD40-CD154 interaction, either through genetic or antibody-mediated means, has a therapeutic effect in murine models of arteriosclerosis RA, Crohn’s disease, psoriasis, and EAE.

This makes CD40 a great candidate for monotherapy, as well as in combination with other treatments.

Three main approaches have been used to design new anticancer agents targeting the CD40-CD154 interaction. Two involve delivery of CD154 either as a recombinant protein or via gene therapy. The third uses monoclonal agonistic antibodies against CD40. This last approach is the one that’s been explored the most so far in the clinic.

As a monotherapy, single-agent agonistic CD40 mAbs have resulted in tumor regressions in clinical trials. However, for metastatic pancreatic ductal adenocarcinoma (PDAC) , neither tumor-bearing patients nor mice demonstrated durable tumor regressions from this approach.

In other advanced metastatic solid tumor patients, the objective tumor response rate has been less than 20%. As a monotherapy, preclinical studies predict a low response rate for CD40 agonistic mAbs, particularly in so called “cold tumors”, or tumors that are not highly infiltrated with immune cells.

Since CD40 mAbs are agonists, the dose, schedule, and even optimal route of administration have been difficult to define. The use of CD40 agonists in the clinic has revealed an association with particular toxicities, including cytokine release syndrome, fever, chills, thromboembolic events, fatigue, and tumor angiogenesis. There has also been reports of mild-to-moderate liver function test abnormalities and decreases in platelets, though both conditions were transient.

It still remains to be determined whether the activation of CD40 on B cells and endothelial cells contribute to treatment-related cytokine release syndrome. The main challenges that remain with this particular form of therapy include patient stratification and identification of the right therapeutic combinations.